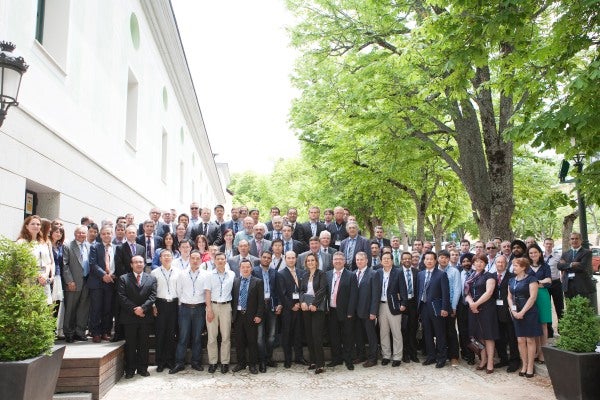 The FORAN Users Meeting is organised every two years to share their knowledge with other FORAN partners.

The eighth FORAN Users Meeting (FORUM 2014) took place from 11 – 13 June 2014 in the Parador de la Granja, Segovia. The great interest raised by the event, organised every two years among FORAN users, is shown by the high number of participants.

The event started on Wednesday, 11 June, with a guided visit to the Royal Palace and Gardens of La Granja, and with a welcome reception to the approximately 100 participants that arrived from all over the world. On Thursday 12 June, Rafael de Góngora, General Manager of SENER Marine Business Unit, welcomed the attendees thanking their participation in an event which main objective is to share the impressions about the FORAN System between the users and SENER. In a brief speech Mr. de Góngora exposed the 2013 SENER figures and the guiding lines of the Strategic Plan for the 2014-2016 period. Miguel Ángel Rojí, from Navantia (Spain), presented about the optimization of the design and production in the Spanish shipbuilding group of reference. Following was Kevin Duckworth, from BAE Systems Maritime Submarines (United Kingdom), who talked about the optimization of FORAN in the Royal Navy´s Successor Program (nuclear submarine deterrence), particularly about the integration with the Product Lifeclycle Management (PLM) tool. The first conference session finished with Igor Shaposhnikov, from Severnoye Design Bureau (Russia) with a lecture about the FORAN integration with a PLM tool already developed by the design office.

The second session started with Aleksey Shadrov, from Vyborg Shipyard, and Sergey Tolstoguzov, from Design Group Ricochet (Russia), with a shared speech about the implementation in the shipyard of the consecutive FORAN versions from 30 to 70, and about their recent success in the development of a floating dock, the only alternative to put in the water a new series of icebreakers. Jim McLauchlan, from BAE Systems Naval Ships (United Kingdom), continued with a presentation about the challenges of the use of FORAN, especially the newly developed module for the P&I diagrams in the Type 26 new destroyers program. Prabjot Singh Chopra, from SeaTech Solutions (Singapore), spoke about the required functionality for the early design stage from their perspective as ship designers, and finally Ricardo Rozados, from Abance (Spain), demonstrated with precise figures the benefits of an outfitting module-oriented design and the way to achieve it with FORAN.

During the Thursday 12th evening it was performed a guided visit to the city of Segovia, followed by a formal dinner where Verónica Alonso, in the name of SENER, gave the FORAN Photography and Screen Capture Awards which, in their fourth edition, were obtained respectively by Babcock Marine (United Kingdom) and Asmar (Chile).

On Friday 13th the first conferences session started with Juan Pablo Soto, from Asmar (Chile), with a presentation about the use of FORAN in the calculations of the electronic equipment precise positioning to minimize interferences, followed by Yiqi Song, from CSDDC (China Development and Design Center), who departed about the use of FORAN in their design office. Fernando Alonso, from SENER, was next to talk about the integration of FORAN with a PLM solution developed by SENER, and finally the session ended with a presentation from Mon Seob Cho, from SENER Korea, with a paper about the options to customize FORAN to the very specific demands of the Eastern shipyards.

The last technical session was performed completely by SENER personnel, starting with Rodrigo Pérez, who introduced and demonstrated the latest functionalities available in FORAN for Initial Design, followed by Augusto Gómez, who spoke about the developing plan foreseen to adapt FORAN to the offshore industry. Finally, Rafael Martínez-Abarca introduced the new developments for the next FORAN V70R3.0, expected in the market by the end of July, and the plans for future key developments.

The Eight FORUM was then closed by Rafael de Góngora who, once gave the Best FORUM Presentation Award to Prabjot Singh Chopra, thanked everyone for their presence and expressed his satisfaction for the result of the meeting, not just for the numerous participation but for the enthusiasm and the interest of the participants in keeping coming to events like this, as the perfect vehicle to tight the links between the FORAN users and SENER, to interchange impressions about the System and to co-operate to steer its future.