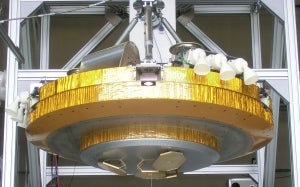 The SENER engineering and technology group is participating in ExoMars, a European Space Agency (ESA) programme that includes two missions: ExoMars 2016, consisting of an orbiter and a descent module that will land on Mars, and ExoMars 2018, which will put an exploration rover on the Red Planet’s surface. Exomars 2016 has been launched on 14 March from Baikonur (Kazakhstan).

The FSSM is responsible for supporting the front shield for the duration of the voyage to Mars and for ejecting it during the module’s descent through the martian atmosphere, following deployment of the parachute.

The SPSSM includes the mechanisms that support and eject the back shell during the final part of the parachute descent; the module’s main structure, which holds the avionics and scientific equipment for the whole mission; and a crushable structure that deforms to absorb the final impact of the landing on Mars.

SENER also has presence in the scientific payload. The company has performed the Software Product Assurance activities of the NOMAD instrument for the study of Mars’ atmospheric components.

On the ExoMars 2018 mission, SENER is responsible for three of the mechanisms for the Rover’s Drill, enabling drilling of the Martian soil to a depth of two metres, and for the hold down and deployment mechanisms for the vehicle’s solar array.

Further equipment designed and built by SENER includes the Special Check-Out Equipment (SCOE) for the Guidance, Navigation and Control (GNC) subsystem on Schiaparelli, the ExoMars 2016 descent module. SENER is also producing the SCOE for the Attitude and Orbit Control and Guidance, Navigation and Control (AOC-GNC) subsystems for the ExoMars 2018 mission.

Finally, SENER is also supporting the ExoMars 2018 mission by analysing and checking the GNC subsystem in terms of its performance and assessing the verification of the related requirements.

ExoMars will be the second mission to place SENER technology on Mars, following the company’s contribution to Curiosity, the NASA rover that has been exploring the planet since 2012.

SENER supplied the pointing mechanism for the high-gain antenna that enables bi-directional communication between the rover and the mission’s tracking stations on Earth.

To date, SENER has supplied more than 270 devices and systems for satellites and space vehicles to NASA, the ESA, JAXA, and Roscosmos, all without a single recorded fault.