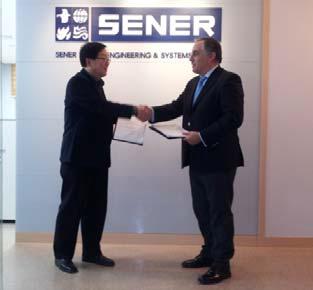 SENER and POSCO PLANTEC (part of the South Korean group POSCO Family) have signed a contract for the design of a 1,200 passenger vessel in Madrid on 13 June 2013. The vessel is to be build and designed for the following operational areas: northern Mozambique, Dar es Salaam, Zanzibar, Tanga and Mombasa.

SENER will develop the conceptual and classification engineering and the 3D model to extract the production information. It is going to be developed with the 3D CAD system FORAN, which was also developed by SENER. The design belongs to a specialty type well known by SENER, due to the recent references of passengers and Ro-Ro vessels.

Among the most important requirements of the ferry, which will have an overall length of 90m, is its passenger capacity, divided in economy, first and VIP classes. The ship will have a garage for cargo and vehicles, with access through one stern ramp for cars and trucks and two side ramps for cargo. The speed on trials will be 16k at the design draft of 3.35m. It will have a crew of 32 people.

This project represents an important milestone for SENER, as it is the first marine engineering contract gained in South Korea.