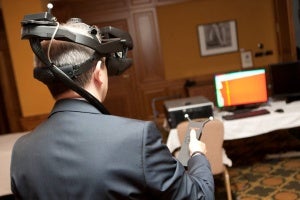 With a strategy focused in innovation, SENER is going ahead in the Virtual Reality (VR) applications for shipbuilding. After the development of the second generation of a viewer, FORAN FVIEWER VR, for the virtual navigation through the ship 3D model, SENER has recently presented a new and innovating application in a Head Mounting Display (HMD).

The recent FORAN Users Meeting in Toledo was the venue for this new experience, where SENER in collaboration with Ingevideo showed to the event attendees two different and innovative approaching to the VR. The first one was a VR room, with a screen of 6 m length and 3 m wide, a projector Christie Digital Mirage CP2210 (resolution 2048 x1080 and 12.500 ansi lumens) and Is900 ultrasounds tracking system of the company Intersense. The second and more surprising was the interactive demo with a HMD with an optical tracking solution. Both environments were used to navigate around ship 3D models.

HMD is a device that lets the user to view and interact with 3D simulation environments, in this case applied to ship 3D models generated in FORAN. The one presented was an HMD of high range to be used on trainings and simulation applications, SX111 model from NVIS manufacturer. It is worth to mention the wide field width (wide field-of-view) that covers 102 degrees horizontally and 64 degrees vertical, with resolution SXGA (1280×1024).

The optical tracking system WorldViz PPTX model had four sensors (or infrared cameras) located in each of the four corners of the area to be covered inside the room, in this case 5×5 m to allow a precise location in three dimensional space of the Active LED marker located in the HMD. In addition, a gyroscope (shelf inertial orientation tracker) gives information about the rotations and revolutions of the HMD. Led marker data, as well as rotations are transmitted to the workstation very quickly so that the experience is very real. Finally, in order to interact and navigate through the ship 3D virtual model it was used a wand (PPTWand) specially configured for a wireless use with the module FORAN FVIEWER VR.

A VR room has recently supplied by SENER to NAVANTIA Cartagena, a great example of the benefit of using the VR for shipbuilding. It is being used to review the model of the new generation of submarines developed in FORAN for the Spanish Navy, the S80 series.

All the FORAN FVIEWER VR, the software and the hardware have been supplied by SENER and Ingevideo as SENER´s partner. SENER plans to continue innovating and going forward in this field, due to the important advantages and cost reductions reached when the model of the ship can be checked at early design stages in such an interactive and intuitive way.