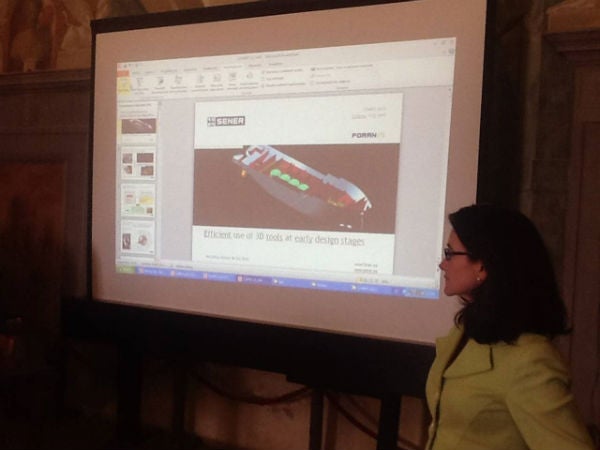 SENER has taken part, once again, in COMPIT, the international conference on computer applications and information technology in the maritime industries, which takes place every year in Europe. This year the event was held on 14-17 April in Cortona, Tuscany, in Italy.

Verónica Alonso presented the paper ‘Efficient use of 3D tools at early design stage’, which was written by Carlos González, Rodrigo Pérez and Verónica Alonso, all from SENER.

The work, which is of great interest in the marine field, is about how it is possible to use a 3D CAD tool like FORAN at early design stages, in order to optimise the overall design process.

It is at this stage where most of the relevant decisions are made, usually based on estimations. FORAN allows for early ship 3D models to be produced in a very quick and intuitive way, along with the automatic creation of all necessary drawings.

The most relevant advantages of this approach are the elimination of errors and inconsistencies in the model, the possibility to make quick changes, and the ability to reuse data in the detail and production stages.