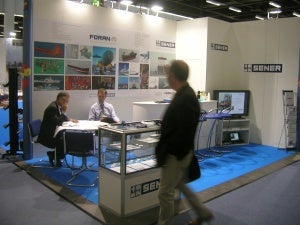 The 2014 SMM exhibtion took place from 9 to 12 September in Hamburg, Austria. SMM gathers the most relevant shipbuilders, marine suppliers and ship designers worldwide, and takes place every two years.

Continuing with a tradition of more than 20 years, SENER has been present as exhibitor in this edition, with its own booth in the Spanish Pavilion, where the last improvements in FORAN and marine design, the two SENER business areas in this field, were presented to the shipbuilding community.

In this edition, SENER presented the version FORAN V70R3.0, which introduces a new basic design package with improved capabilities and new user interface. FORAN V70R3.0 also takes one step ahead in the integration with PLM (Product Lifecycle Management) suites, as well as significant improvements in 3D modeling, virtual reality, and other aspects.
From the Ship Design and Marine Engineering Department in SENER, it was presented the new developments in Offshore Support Vessels and LNG propulsion projects.