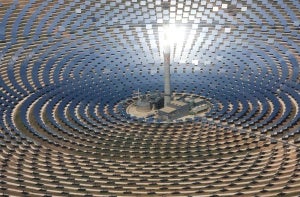 SENER’s exceptionally qualified and highly cohesive staff grew by 157 people to reach a total figure of 5,251 people by the close of the last financial year.

In addition to carrying on in its original activities in engineering and construction, over recent years the Group has stimulated and developed new industrial firms, that are evolving in the aeronautics industry and energy and environment areas, companies in which SENER continues to hold significant stakes.

1) SENER Ingeniería y Sistemas, S.A., part of the Group’s engineering and construction area, is one of the biggest Spanish engineering companies, with divisions in four continents. The Spanish engineering market was very weak in 2011, but an increase in international activities allowed for operations in the rest of the world to be strengthened and growth to be maintained. The development of the Brazil division and the opening of a new division in Busan (South Korea) have been the focuses for international organizational development in the past financial year, while the growth of project contracting in Asia continues to intensify SENER’s interests in this region.

2) Secondly, in the area of aeronautics, SENER is majority shareholder in Industria de Turbopropulsores, S.A. (ITP), the Spanish industry leader in aeronautical gas turbines. The strategy of specializing in low pressure turbines for large aeronautical engines and the solid investments made over the past decade have enabled a 7% growth in sales, which will speed up in 2012. ITP has maintained its robust level of tangible, intangible and financial investments, as well as R&D investments, which reached €78.2m in the last financial year.

3) Lastly, in the area of energy and environment, all the companies are backed by technologies and processes that have been developed within the SENER Group. In this context, the first major milestone was the start of commercial operations for Gemasolar, a 19.9 MWe thermosolar plant, in May 2011. SENER was responsible for providing 100% of the technology and design engineering, in addition to managing the construction and commissioning work. The plant, owned by the company Torresol Energy (60% belonging to SENER), is of a unique kind in the area of heliostat fields, with a central tower receiver and exceptionally long-term storage in molten salts.

SENER attributes these results to its "3i: Innovation + Internationalization + Investment" strategy, where innovation is the main pillar on account of being the facilitator and source for the other two.

i1: Innovation
SENER is a fully technological company, which sees innovation as a process of continuous improvement. The company, at all times managed by engineers, has a deep-rooted tradition of venturing into unchartered territory with engineering projects that have never been undertaken before.

The ambition in its approaches is sustained thanks to ongoing investment in innovation that is equivalent to 18% of the total working hours. Innovation is the source of the differential factors and technological advantages that give SENER its recurring success in the markets, even in those international markets where it does not have a steady presence or its presence has yet to be consolidated.

Innovation is also a point of departure for the Group’s investments, all of which are based on technological initiatives or processes generated in the area of engineering. The constant requirements of innovation are particularly demanding in terms of resources allocated in the areas of aeronautics and energy and environment. In energy and environment, the fundamental element of competitiveness lies in SENER’s ability to provide technologies that will constantly reduce the cost of renewable energies.

i2: Internationalization
SENER is a private engineering and technology group with a growing international presence. Despite this, in 2011 the percentage of sales outside Spain was five points lower than in 2010, due to the effects of the company’s heavy workload on the Spanish solar thermal projects. However, our contracting was mainly abroad and, therefore, SENER is rapidly transforming itself in order to improve its operational capacity and efficiency in a context that will be fully international.

SENER has forged an international reputation for carrying out complex, multidisciplinary projects, which exceed client expectations. The company’s internationalization is based on three keys:
a) Product superiority, due to the continuous incorporation of new technologies and commitment to quality.
b) The opening of local divisions.
c) Alliances with the world’s top engineering and construction groups.

i3: Investment
2011 was marked by the start of production at the three thermosolar plants owned by Torresol Energy: Gemasolar, which was commissioned in the Spring, and Valle 1 and Valle 2, which began commercial operations in December of the past financial year.

As a whole, these three units have represented SENER’s biggest investment in its more than 50-year history. An investment that was carried out on time and within budget and which, from 2012 onwards, will contribute significantly to the Group’s finances.

In spite of the fact that the engineering sector is encountering very serious problems and competition is reaching very difficult levels, which lead to taking on risks and financial conditions that were unimaginable prior to the economic crisis, the SENER Group’s prospects for 2012 are not negative. However, this does not therefore mean that the organization will be immune from the effects of an economic situation where undertaking projects will be especially demanding, whether due to the commercial conditions imposed by the markets or the growing geographical complexity of the Group’s operations.

In 2012 and the periods to follow, SENER will continue to maintain its ‘3i’ strategy. We can confirm that both the main projects that are underway and the new contracts reached will incorporate technologies in which SENER has developed innovative benefits. This is the case for the low pressure turbines for aeronautical engines, the cryogenic facilities for liquefied natural gas, the solar thermal and biomass power plants, the FORAN system for designing and constructing ships, the high precision and reliability mechanisms for space applications, the high-speed rail systems, etc. The innovations we have developed are those that truly open the doors to significant international projects, either directly or because they position the Group’s companies as desirable partners in alliances vying for large engineering contracts throughout the world. Furthermore, in order to expand and better support its international activity, SENER will continue to extend its external network and grow its local divisions in certain countries.

In future, SENER will continue investing in technological development in all the Group’s areas. In 2011, the organization worked on numerous R&D&I projects that included incredibly varied fields of activity, a highlight of which were the advances achieved in solar thermal power generation, a sector in which the SENER Group has consolidated its position of global technological leadership. For 2012, the R&D budgets show 37% increases in Engineering and 45% increases in Aeronautics in comparison with 2011.

Technology is what allows SENER to maintain a relatively privileged position today and it will be what helps it overcome the current difficulties in the medium and long term.