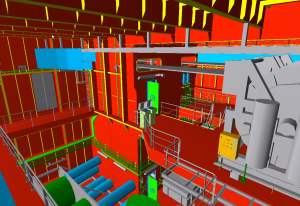 Following a strong strategy for innovation, last 30th of November SENER launched its newest V70R2.0 FORAN release. With a good payload of new capabilities and innovative developments, FORAN continues as the leading provider of integrated CAD/CAM solutions for shipbuilding and offshore.

Nowadays, when the design cycle has shorten and the globalization allows companies to provide design services virtually from anywhere, the key factors to guarantee staying competitive are the right management of information through the complete design process and the seamless transition from one design stage to the next. This is, taking the right decisions as early as possible and developing them gradually, from basic design to production, with no data loses or derived drawbacks.

For this last FORAN release, we at SENER have strengthen the links between the basic and detail designs, and between the ship design and the running PLM solution. Another step towards a cost-effective, energy-efficient, green design as the market demands.

FORAN remains as the only CAD/CAM system which has been fully in-house developed, completely ship oriented. In FORAN integration doesn’t come as an effort to communicate between different disciplines from different developers, but as the natural result of accessing the same information from different perspectives.

This natural integration has been even improved for the new release by unifying input data windows, opening the electrical data to generic pipe and HVAC fittings, controlling the equipment position in the ship regarding the maturity of the already connected cables.

The FORAN V70R2.0 also includes the complete management of the ship applicability, which means full control of sister ships (like modifications applied downstream but restricted upstream, integrity of the shared standards…). The PLM links have been extended too, yet in the process to integrate completely to the degree demanded by the most stringent markets, such as the naval ships and the offshore.

In relation to enhancements in all the design disciplines, the new FORAN V70R2.0 incorporates new capabilities to improve the designer´s routine. Starting from the Initial Design discipline, a new and revolutionary module FBASIC replaces all the former Naval Architecture applications, with a single and modern environment. This, in addition to the FORAN General Arrangement module (FGA), also subject to improvements, allows a fast and successful management of the initial design stage.

Many changes in the Hull Structure discipline allow a quick generation of the 3D model of the structure. The most relevant are the new module FNEST for the management of the nestings, the new profile definition options and the new clash detection command to calculate interferences between structural parts. It is worth to mention the benefits of the FORAN link with FEM tools, being an important approach especially relevant when the 3D model is built at early design stages.

Regarding the Machinery & Outfitting discipline, the most remarkable improvements are FSYSD, the new application for the complete management of system diagrams (symbols, P&I and electrical diagrams), enhancements in the clash detection algorithm, a new level of integration between the 2D diagram and the 3D model for pipelines (including even a graphic selector of pipes from the diagram), as well as the interactive solid routing of HVAC ducts and cable trays.

For the Electrical Design discipline, beside the new FSYSD already mentioned, the most relevant development is a new set of commands for the complete calculation of electric loads on board.

About the drawings generation in FDESIGN module, it is worth to mention the new option to perform a multiple selection of sections, as well as the filtering of structure drawings, among other useful developments.

Some other general innovations are the new solution to extract material reports from any ship discipline, and the incorporation of stereoscopic visualization and tracking in FVIEWER, the Virtual Reality viewer. Minor, cosmetic change but with everyday impact is the new palette for FORAN 3D model: it was time to replace the very basic and strong colors with new, softer and more natural ones. Sometimes just small details make the difference.

With a continued history of more than 45 years in the market, SENER keeps on developing the cutting-edge solution for the shipbuilding success.