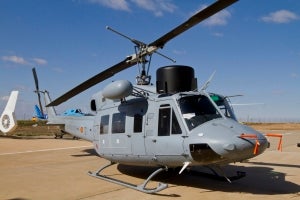 The temporary joint venture formed by companies SENER and INAER has received technical certificate no. 003/16 from the INTA (the Spanish National Institute for Aerospace Technology) as part of the project for extending the lifespan of AB-212 helicopters for the Spanish Navy.

This certificate no. 1 (CT-1) is a key milestone in the certification process because it will make in-flight operation of most of the new mission systems possible, including the tactical mission computer, the radar, the visible and infrared camera, and the missile approach warning system. These devices are all integrated in a full glass cockpit.

SENER and INAER expect to deliver three helicopters with the CT-1 configuration before the end of this year. Meanwhile, the pending certification process will continue, as will the delivery of the rest of the aircraft in 2017 and 2018.

The programme for extending the lifespans of seven of the navy’s Agusta Bell AB-212 helicopters (which entered into service in 1974) will make it possible to extend these aircrafts’ lifespans significantly, integrating advances in aeronautics equipment and giving them new capabilities, such as radar, night vision systems, protection and self-defence systems, which are key for efficient operation in increasingly demanding domestic and international scenarios.

Because of their commitment to defence, both SENER and INAER have made a major investment in engineering and certification for this programme so that they can take on new complex life-extension projects for helicopters.

Thanks to this joint effort between the Spanish government and industry, the Ministry of Defense now has a strategic domestic capability that will allow it to meet the operational needs of its helicopter fleets for the coming years.