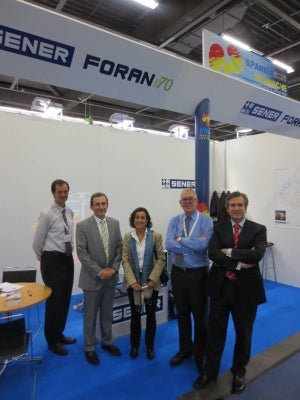 Once again, SENER took active part in SMM Hamburg, the most important exhibition in the marine field that takes place every two years in September.

This 25th edition reached more than 2,000 exhibitors from over 60 countries.

Located in the Spanish Pavilion which is organized by the Basque Maritime Forum, SENER’s booth hosted European customers and from many other nationalities who remain faithful to FORAN.

Furthermore, a significant number of companies were interested in the System, as well as in other marine engineering services that SENER offers (ship design and consultancy).

A significant number of personalities came to visit SENER´s stand, including the Counsellor for Industry for the Basque Government (Bernabé Unda) and the Spanish Consul in Hamburg, whom showed a special interest in the technology developed by SENER to navigate through the ship 3D models in FORAN with a Virtual Reality solution.

SENER’s stand had an innovative application projecting an image of great dimensions that could be visualized in 3D using a browser developed as part of FORAN called FVIEWER, which has been one of the surprises of the Fair. The team from SENER was composed by Carlos González, Mirko Toman y Verónica Alonso.