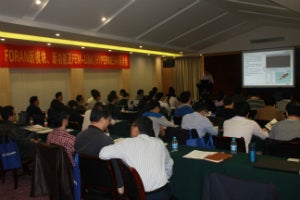 The ‘FORAN new modules, new functions and FEM-Link (Hypermesh) Seminar’ was held on 23 April in Wuhan.

SENER is making a big effort in China, where it has been promoting the FORAN System for many years. Through the seminar, which shared important new enhancements in its shipbuilding computer-aided design (CAD) / computer-aided manufacturing (CAM) System FORAN, SENER (Shanghai) hopes to bolster confidence for existing customers and arouse more interest among the potential customers for FORAN system.

Functions, such as the positioning of equipment either in 2D (views defined in FDEFIN) or in 3D, linking equipment to spaces, collisions detection among them, surfaces and spaces, the new interactive interface, and parameterisation impressed customers.

Songshan Hu successfully demonstrated the FORAN FSYSD modules and outfitting new capabilities for the audience. Through this demo, attendees learned how to use FORAN designing the diagram and accepted wisdom that FORAN outfitting was becoming more and more powerful and convenient.

Customers generally wanted the 3D model that can be reused by others software, which could save time to rebuild model and also hoped CAD/CAM System could be secondary development by customers themselves.

In order to let customers know how FORAN how to solve these problems, Sener introduced FEM-LINK with Altair and BTM’s engineers together. Xinlin Zhou showed attendees how to translate the FORAN model into Hypermesh and Altair’s engineer demonstrated how the FORAN model can be used in Hypermesh conveniently and directly. Associated with the successful application in production, BTM’s engineer shared some
experiences about how to develop on the FORAN system.

SENER (Shanghai) has indeed demonstrated the powerful new functions of the FORAN system during the seminar. Customers learned how the ship 3D digital design can be optimised by using the FORAN system.

During the detail design stage, the use of a ship 3D model is very common, while basic design stage is still based on 2D drawings m, although most of the costs are compromised at this stage. But FORAN system integrates all stages and disciplines in one software and one database, this is FORAN’s greatest strength.