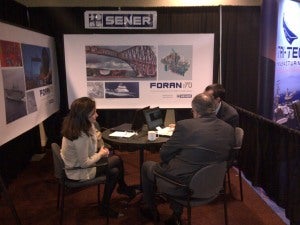 SENER participated in ASNE Day, the annual congress and exhibition held by the American Society of Naval Engineers, which took place from 19 to 21 February 2014 in Arlington, Virginia. The event brings together most divisions of naval shipyards and related companies that want to learn about the latest news and current affairs in the naval shipbuilding industry, both in technical presentations and in the exhibition area, where SENER had a stand.

SENER presented the shipbuilding CAD/CAM System FORAN, as well as services around the marine engineering and ship design. In particular, SENER ran some FORAN live demos, showing the solution for the definition of early design in 3D and the link to export a simplified 3D ship model to different FEM tools, all of great interest in the naval shipbuilding field.

FORAN, an advanced system extended in the naval field worldwide, is used by companies such as BAE Systems in the UK, NAVANTIA in Spain and Severnoye DB in Russia. Widely known and respected in North America, Eastern Shipbuilding Group in Florida and STX Canada Marine in Vancouver are two good examples of companies that rely on FORAN.