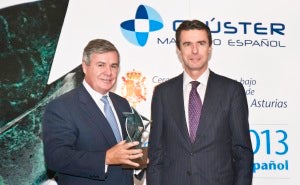 Engineering and technology group SENER has received the 2013 Technology and Innovation Award from the Spanish marine engineering trade association Clúster Marítimo Español. Present in various sectors and enjoying success in the fields of Aeronautics, Energy and Environment as well as Engineering and Construction, SENER started out in 1956 as a marine engineering firm and has managed to maintain this vocation since. Today the group enjoys a leading position in this sector, offering two major lines of business: the design of cutting-edge ships and marine structures, and the development of FORAN, its design and construction software which now boasts worldwide commercial success. SENER has distinguished itself in all of these activities for its innovative, technology-based solutions — characteristics which Clúster Marítimo Español has chosen to recognise with this award. This is the second time that Clúster has recognised SENER’s innovative capability; in 2009, it honoured the group with the Miguel Pardo Award in Technology and Innovation.

SENER President Jorge Sendagorta received the award from the Spanish Minister of Industry, Energy and Tourism, José Manuel Soria, during a luncheon held on 11 December in Madrid. Attendees included the Spanish Minister of Economic Development, Ana Pastor, among other guests. During the awards ceremony, Clúster declared that it chose SENER because "innovation, quality and independence are its pillars and distinctive values. The activity of its business units […] revolves around technological innovation."

Although the pioneering spirit of the group has resulted in a remarkable diversity of business activity with a technological focus, SENER has continued to grow in the marine sector where more than a thousand ships have been built with SENER’s designs. Today, the group offers a wide range of design, engineering and consulting services to shipyards, technical offices and shipbuilders all over the world, successfully marketing its FORAN System — one of the most comprehensive CAD/CAM marine design and construction software programs on the market. In recent years, SENER has opened offices in Asia, responding to the continent’s growing demand for services while continuing to serve clients in the Americas and Europe.

To maintain its position as a technological leader, SENER is continuously investing in R&D, which in 2012 represented 6.5% of the group’s overall turnover. This clearly affirms the group’s steadfast desire to continue improving and broadening its range of products and services, both in the marine sector and all other sectors where SENER operates.

This award follows the group’s earlier accolades in the marine sector, including the prestigious Prince Felipe Award for Excellence in Business. This last award was presented by the Spanish Ministry of Industry, Tourism and Trade and was given to SENER in 2008, in the category of "Technological Innovation for Large Companies" for the group’s FORAN System, which was recognized as a relevant and technologically innovative product enjoying success both in Spain and abroad.