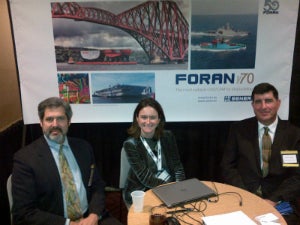 For the third consecutive year, SENER has participated in the 2015 edition of the ASNE Day, the yearly Congress and Exhibition.

The event is organised by the American Society of Naval Engineers from the United States. It took place between 2-5 February in Arlington, close to Washington DC.

The exhibition is designed those involved in the naval industry all who want to learn about the news in the naval shipbuilding industry, both in the technical presentations and in the exhibition area, where SENER had a stand.

SENER presented the latest developments from its FORAN System, so as the services around the marine engineering and ship design. It is to be highlighted the capability from the FORAN System for the initial design stage and the transition to the later stages, in a seamless process that allows to complete the ship from the moment in which the main parameters are set, to the last production drawing.

FORAN, an advanced system extended in the naval field worldwide, is used by companies such as BAE Systems in the UK, NAVANTIA in Spain or Severnoye DB in Russia. Widely known and respected in North America, Eastern Shipbuilding Group in Florida is a good example of a company that rely on FORAN.

SENER is developing an intensive commercial activity in North America, where it is offering innovative approaches to the new demands.