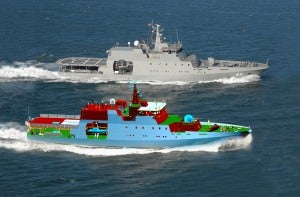 The new version incorporates improvements for the user experience and its technology.

FORAN offers a solution covering all design stages and disciplines. The process starts with the forms generation in FORAN, or forms can be imported from a third-party solution.

The FGA module for the generation of the general arrangement enables use to create a quick definition of compartments and spaces in 3D. This module incorporates new functionality for the early positioning of equipment in the 3D model that can be linked intrinsically to the spaces of the ship and will be integrated with the rest of outfitting solutions in further design stages.

A new module, FABSIC, groups all the former applications related with the naval architecture calculations, and stores the information in the FORAN database, enabling the user to organise the concepts in a hierarchical tree. New, interactive enhancements have also been added to the loading conditions and a user-defined stability criteria, all of which is integrated within the spaces and volumes defined in the FGA module of FORAN. FBASIC will be finished in December 2014, with the incorporation of the deterministic stability module (FLOOD), probabilistic method (FSUBD) and the module for launching (LAUNCH).

The hull structure definition in FORAN follows automated and intelligent-oriented tasks, taking advantage of the topological model. The new release includes an updated version of the structure model definition, with fast generation of fabrication outputs. The innovative representation of structural parts by BREP and new enhancements in the generation of a simplified model that can be exported to FEM tools, dramatically reduces time during the analysis process.

As FORAN is not only devoted to ship design but also to offshore units, some options have been especially oriented to accommodate offshore operability options, such as the possibility to handle transversal symmetries.

The recently redeveloped solution FSYSD for the diagrams definition adds functionality, such as new instrumentation lines according with ANSI/ISA-S5-1-1984/1992 regulation. The communications with other systems has been improved and now it is possible to export multiple diagrams in PDF format. Other updates include the automatic labelling and improvements to check the diagram integrity.

The solution for the standards definition, equipment layout, piping, auxiliary structures, HVAC and interference checking is entirely integrated with the rest of FORAN disciplines. Regarding FPIPE, some remarkable aspects include a new entity for equipment assembly, the replacement tool for straight fittings in pipelines and other functionality in auxiliary structures and supports.

Within the electrical design in FORAN, FCABLE reduces the wasted gaps in the cable filling and allows to export cable transits to Hawke´s HDS. On the other hand, the module FREPG for the reports generation allows the user to define labels, including a QR code.

FDESIGN is the new solution for automatic drawing generation in all FORAN disciplines. Particular improvements to the system include optimising the labelling, the possibility of having drawings of sections defined in different planes, and more properties for distributors containing different heights referred to decks.

It is important to mention the effort made in the development of the integration between FORAN and different product life cycle management (PLM) tools, by means of an advanced and open integration that follows the user’s demands.

Finally, SENER offers a set of solutions for the visualisation of the ship 3D model already generated in FORAN in a virtual reality environment, with examples from a stereoscopic view in a big screen, through cave, helmet or in mobile devices.