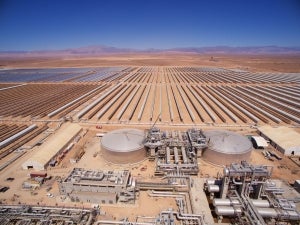 On 4 February, the inauguration of the thermosolar plant NOORo I took place in Ouarzazate, within the NOORo solar complex, which, once completed, will be the largest on the planet.

The event was presided over by King Mohammed VI of Morocco, and brought together political representatives and executives from the constructor companies, among them the President of SENER’s engineering and construction group, Jorge Sendagorta.

SENER, ACCIONA and TSK make up the construction consortium with the turnkey contract, or EPC, for NOORo I, a high-efficiency modern power station.

NOORo I will avert annual emissions of 140,000 metric tons of CO2 into the atmosphere.

In light of this, the director of SENER’s solar department, Miguel Domingo, pointed out that: "For NOORo I, the 29th power station in the SENER pipeline of thermosolar projects, we were responsible for supplying critical technology such as the SENERtrough® parabolic trough collectors, designed and patented by SENER, and the molten salt storage system.

"This is a technological contribution that we are providing not just in NOORo I, but also in NOORo II and NOORo III, in addition to our part in the turnkey construction of the three plants, one of which includes a central tower with a molten salt receiver."

For his part, the project manager of the NOORo I EPC Consortium, Carlos A. Ledesma, from ACCIONA, declared: "The construction of this plant in Morocco has represented a major challenge for the country, the developers and the Spanish companies that have contributed our know-how to the construction and start-up of the facility.

"We are now in a position to say that this large-scale project has been successfully completed after several months of hard work, overcoming many logistical and technical problems that have tested the professionalism of our joint venture, highlighting the fact that we are a leading company in the performance of this kind of technology."

He also asserted that: "For us at TSK there rests no doubt that our involvement in the global management of the project and in the design, construction and commissioning; our supplying of the distributed control system, of various pieces of electrical equipment, of the high-voltage line and of the water treatment plant, not to mention the electrical assembly and the I&C, have all been major contributing factors towards the success achieved."

In addition to NOORo I, SENER is a participant in the other two thermosolar phases of the project, NOORo II and NOORo III, in the same turnkey construction consortium. The three thermosolar plants are to provide a total of 510MWe of power.

All of them will be equipped with thermal storage systems, enabling them to continue to produce electricity in the absence of solar radiation. As a matter of fact, the time with the greatest demand for power in Morocco is nightfall, so the integration of these facilities in the Moroccan electricity system will be one of optimal efficiency.

Altogether, they will avert annual emissions of 470,000 metric tons of CO2 into the atmosphere.

It is important to highlight that local input to the project is totalling as much as 30% of the construction work, as the constructor companies, including SENER, are strongly committed to the Ouarzazate community and to the Kingdom of Morocco.

Both workers and suppliers from the area are being employed, and have been ever since the start of the NOORo I first phase.

Following NOORo I, SENER is now beginning the works on NOORo II, which is rated at 200 MWe and has molten salts storage capacity, and in which SENER’s second generation of parabolic troughs, known as the SENERtrough®-2 system, are being installed as they are in NOORo III, rated at 150 MWe.

In contrast to the others, this plant will have a central tower with heliostats and a salt receiver, in the same configuration as that successfully applied by SENER at Gemasolar, in Seville (Spain).

NOORo III, which is seven times larger, is the natural evolution from this pioneering facility and will include advances such as a larger heliostat, designed and manufactured by SENER.

SENER expects to complete the works and commissioning of these two last thermosolar phases of the NOORo complex by the end of 2017.