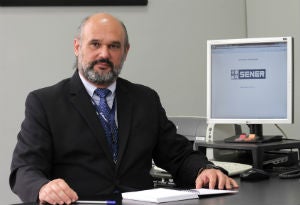 Rafael Martínez-Abarca has been appointed operations manager of the Marine Strategic Business Unit (MaSBU) of SENER, an engineering and technology group that has a workforce of about 5,500 professionals and offices in four continents.

As operations manager, Rafael Martínez-Abarca will supervise all SENER projects in the marine field, comprising both engineering projects, activity in which the company successfully develops design projects and engages in ship construction throughout the world, as well as projects related to FORAN, SENER’s CAD/CAM shipbuilding software program, which is licensed in more than 150 shipyards and technical design offices, being one of the most used programs in the industry.

Martínez-Abarca is a naval architect, graduated from the Universidad Politécnica de Madrid (Polytechnic University of Madrid), and joined SENER 24 years ago. During this period, he has held positions as software development engineer, head of section for marine engineering structures, marine engineering project manager, FORAN development and maintenance project manager, head of section for marine systems, and regional country manager for China, Japan and Korea. This last position will be taken over by Alfonso Cebollero, MaSBU commercial director for Asia-Pacific.

Rafael Martínez-Abarca’s appointment is the result of the reorganisation of SENER’s marine strategic business unit, which is now undergoing a process of international expansion. In 2012, SENER opened offices in China and South Korea to meet the growing demand in these countries. Currently, the MaSBU continues to drive the expansion of our customer base throughout the world, especially in Asia and America, but also in Europe.