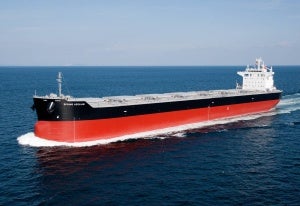 FORAN has been the CAD/CAM software selected for the entire design of the vessel Spring Aeolian, an 83,000DWT bulkcarrier considered the largest deadweight and cargo hold capacity Panamax bulkcarrier in the world.

The vessel, already launched, has been designed and built in Sanoyas Shipyard, a subsidiary company from Sanoyas Hishino Meisho Corporation in Japan. FORAN is the main CAD toolset for their in-house design working group since middle 2007.

The vessel (length overall 229m, molded line breadth 32.24m, depth 20.20m and a summer draft 14.56m) features some improvements making her unique in its type: propulsion train combining low-speed and long-stroke main engine with a high-efficiency propeller and the Sanoyas-Tandem-Fin (STF), fitted in the shell ahead of the propeller; extra-widened cargo hatches, for easy operation during the cargo handling; high capacity fresh water generator and dedicated tanks for hold washing and disposal, and aspecial fuel heating system that prevents the heat to damage the cargo in the holds and saves energy (and thus money and CO2 emissions).

From the environmental point of view, beside the above mentioned features, there are also segregated tanks for accommodation discharges, dirty hold bilge and others, double hull structure fuel tanks, and independent bilge segregation system for the engine room. This allows the ship to proudly show the ‘ECO-ship’ tag all around the seven seas.

Sanoyas shipyard is at the forefront of bulkcarrier design being a world´s reference, and for that counts on FORAN System to continuously enhance the designs in search of the excellence. That is the key to succeed in the competitive world of shipbuilding.