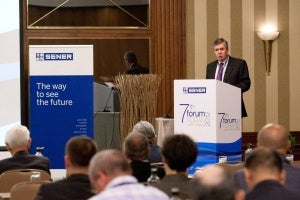 With the memories of the 7th FORAN Users Meeting (FORUM) still vivid in our mind, the event evolves from a mere technical session to a warm and friendly meeting of people that share the benefits of running the same CAD/CAM technology.

Wednesday night, 6th of July, the event started with an unbeatable atmosphere at the gardens of the Hilton Buenavista Hotel: it was the sunset over the Tajo River, with the old city of Toledo framed by the cliffs done by the river. Then the garden party started to welcome all the participants, with ancient music and dance, rescued from the times that Toledo held the three cultures and the myth of the pacific coexistence between Christians, Jews and Muslims.

Thursday morning woke up a bit less warm, and the sessions started with a welcome speech from the President of SENER, Mr. Jorge Sendagorta, which described the good condition from SENER Ingeniería y Sistemas, S.A., despite the global crises, and emphasized the important efforts undertaken in a clear corporate strategy based on the three I’s: Innovation, Internationalization and Investment. Next turn was for Mr. Jesús Panadero, Dean from the Naval Architects and Marine Engineers Technical School in Madrid, who exposed a very interesting discussion around the geometry, not just as a science but as a factor that boosted the evolution of the human mind.

Mr. Alfonso Olmos from Navantia – Cartagena explained the complete arrangement of their new Virtual Reality room provided by SENER, essential for the exhaustive review of the FORAN model from the S80 new submarine, prior to the production phase. To finish with the first round, Mr. Jim McLauchlan, from BAE Systems Maritime – Naval Ships an one of the few members assisting to every FORUM, made an overview on the current and potential use of FORAN on the surface ships, present and future, for the Royal Navy: QEC aircraft carriers, Global Combat Ship – Type 26, etc.

After the traditional family snapshots at the courtyard, it started the second conferences round with Mr. Augusto Gómez, from SENER, which introduced the new reports generation FORAN module, with a common interface for all type of outputs and a specific environment to generate templates. Mr. Mariusz Jakubiniec, from Stogda Ship Design & Engineering, explained how they deal with the changes made in the design and their influence in the manufacturing processes in a FORAN environment. The second round finished with Mr. Colin Sear and Mr. Paul Moscrop, from BAE Systems Maritime – Submarines, which spoke about integration between FORAN and Teamcenter as key components of the architecture for the Phase I of the Successor Program, the new at-sea nuclear deterrence for the UK.

The last series of papers from the evening started with Mr. Rakesh Roy, from Vedam Design & Technical Consultancy, who presented a methodology for the generation of a documents management system. Mr. Carlos González, from SENER, followed with the introduction of FNEST, the new FORAN application for the structure elements nestings, and finally Mr. Norberto Fiorentino, from SENER Argentina, made an exhaustive trip to the history and recent major upgrade executed over the Almirante Irizar, the iconic Argentinean icebreaker that suffered a critical fire some years ago. Both engineering work and CAD system is being supplied by SENER.

Later on, a walk on the narrow streets of historical Toledo in its principal day of the year, the Corpus Christi, and an exhaustively guided visit to its Cathedral with exclusive organ concert included, made the perfect start for a brilliant night at the "Cigarral de las Mercedes", where everyone enjoyed an aperitif served with the views of Toledo by night as scenery. By the end of the dinner, Mr. Luis García, General Manager of the Marine Business Unit at SENER, and Mrs. Verónica Alonso, FORAN Marketing Manager, hosted the ceremony to bring the awards for the Third Photograph and FORAN Screen Capture Contest. This edition, the winners were Mr. Arthur Cook from Babcock Engineering Services for the photograph, and Mr. Ricardo Rozados, from Abance, for the FORAN screen capture.

The opening of the Friday´s first round of conferences was for Mrs. Virginia Marcos, from SENER, who introduced the latest and more remarkable developments in the Electrical Design Subsystem of FORAN. Following, Mr. Sergei Tolstoguzov, from Design Group Ricochet, made a brilliant description of the history of a Russian battleship from XVIII century, and the corresponding project of a new construction of a similar ship nowadays, using FORAN. Finally, Mr. Guangwu Liu, from SENER, introduced FBASIC, the new FORAN module to perform all the naval architecture calculations, gathering the functionality from the current ones into a single application. Yet not ready for the next FORAN release, its completion is foreseen for the short term.

The fifth and last session started with Mr. Antonio Valderrama, from SENER, who introduced the FSYSD as the new FORAN module for pipe and electrical diagrams in a single environment. Next participant, Mr. Anwarul Azeem, from Drydocks World – Dubai, exposed a vast series of customized outputs from the FORAN System, and the last intervention was for Mr. Rafael de Góngora, from SENER, who detailed the strategy of SENER regarding the development of the FORAN System, ensuring a continued and increased effort to provide our customers with the most advanced and integrated CAD/CAM tool in the market.

This FORUM edition also had an eye-catching premiere, from the collaboration between SENER and Ingevideo, which also set an on-site qualified working team: the installation of two parallel Virtual Reality rooms. One with a massive 6,5 x 3,9 m rear-projection screen, active 3D stereo and ultrasonic tracking system, holding up to twenty people, and another one with a helmet type projection device, for individual use, with optical tracking and gyroscope, for a complete 3D model immersion feeling.

Both rooms showed the FORAN model from the Argentinean Navy´s Almirante Irizar icebreaker, with the visualization of FVIEWER module. FORUM participants could enjoy the unique experience of a virtual walk, moving from the helideck to the engines room, via the wheelhouse and the fuel wing tanks, through the characteristic reinforcement of a polar ship.

Mr. Luis García put the FORUM 2012 to its end with thanking words for all the participants, especially for those who attended all the previous six editions -a goal not easy to achieve-. There were also thanking words for the SENER participants, with precise mention for the organizers that did it possible again "better than the previous one", ending with emotive words for goodbye to all the FORAN community.