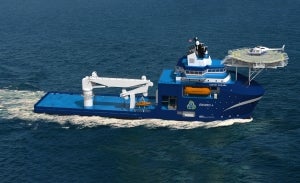 Based in Panama City, Florida, Eastern Shipbuilding Group (ESG) launches the Harvey Sub-Sea on 6 November. This is the first vessel to be successfully designed in the shipyard with the Foran CAD/CAM System, developed by the engineering and technology group Sener.

The multipurpose support vessel (MPSV) is the first in a series of two, and has a length of 103.7m, beam of 22.3m and depth of 8.92m. It is regulated by ABS/USCG/SOLAS DP2 DE Z-Drive MPSV and will operate in the US Gulf of Mexico for Harvey Gulf International Marine.

Sener and ESG both signed an agreement for the complete implementation of Foran in June 2013. This was a challenging decision for the shipyard, which was accompanied with important changes in order to reinforce their design office, along with the aim of improving the overall design and production processes.

Foran was successfully implemented in all design and production disciplines and adapted to fulfil the US shipbuilding practices. This shipyard has a long successful history behind them, thanks to their shipbuilding know-how and an innovative mentality, and is always improving technology to fit the market demands.

Nowadays, with Foran in several projects, the shipyard has improved their production time and quality, as ESG of vice-president engineering, Fernando Malabet, recently declared: "Eastern Shipbuilding Group received a regulatory design package with minimal details and extensive areas to be defined and refined during the 3D development of the model. This task needed to be accomplished not only with experienced 3D modellers, but also allowing the Naval Architect to be part of the modelling process, this way filling in the blanks and properly complete the design of the vessel. This can only be achieved by using software like Foran."

Fernando Malabet added: "Foran not only cut the modelling time by 50% as compared to other software packages, but allowed different disciplines and people with different levels of training in modelling ability, to become part of the process, which made it more efficient, exact, and we had time to receive feedback from owners and production. Once the output presentation and process was agreed with the production side of the yard, with Sener’s help we automated as much as possible the creation of nests and assemblies, creating a full package with a time reduction of about 25% in comparison with the time that it took with other software packages."

"Since the original packages from both design firms for Hull 249 and 234 were ‘Regulatory’ only, ESG was able to complete the design and detailed sufficiently for production purposes with the use of Foran, for all areas, structure, piping, electrical and outfitting, involving from modelers, 2D designers to engineers of various disciplines. From this model, structural as-builds will be developed showing a higher level of detail and accuracy than the original package contained. Finally ESG can say basic regulatory design by Vard (vessel 249) or Robert Allan (vessel 234) and detail production design by ESG, thanks to the use of a fully integrated software like Foran," Malabet said.

Sener, who is collaborating closely with ESG to fulfil their demands, is playing an important role in North America, and it is making a strong effort to improve Foran in order to help the shipbuilding stakeholders to develop better projects and be more competitive. Foran celebrates its 50th anniversary in 2015.