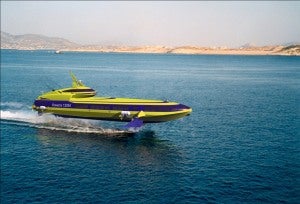 Alekseev Hydrofoil Central Design Bureau (Alekseev HCDB) has signed an agreement with SENER Ingeniería y Sistemas (SENER) for the license to use the FORAN CAD/CAM System, developed by SENER. The design of the mythical ‘Ekranoplany’ highlights among the different activities that Aleekseev is developing with FORAN, a revolutionary design between a heavy aircraft and a light boat. FORAN will be the design tool in Alekseev with more than 100 hundred of users.

The ‘Ekranoplany’, also known as ‘Caspian Sea Monster’, is characterised by the taking-off and landing quality from the water surface, taking advantage of the effect produced when the vessel is close to the sea or water. This technology was created by the hydrofoil design bureau founded by the soviet designer Rostislav E Alekseev, in Nizhni Novgorod, where the rivers Volga and Oka converge. He also was the designer of the fluvial or maritime hydrofoil known as Raketa and Meteor.

Alekseev HCDB already designed this kind of vehicle in the sixties with the interest from the soviet military environment. The prototypes where tested in the Caspian Sea and one of them was named KM, which means ‘model ship’ in Russian. Finally, some western observers denominated this vehicles as Caspian Sea Monsters, denomination that since then everybody knows.

Alekseev HCDB starts now the "Ekranoplany" development in FORAN, with a loading capacity from 50t to 600t, although in the future it will be between 2,000t to 3,000t. It is expected that the initial developments will be in 2016. In the meantime, the debate about if this vehicles are vessels or aircrafts continues.

SENER reinforce its presence In Russia with this FORAN contract.