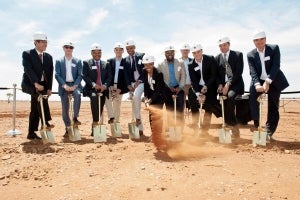 An ENGIE-led consortium with partners, SENER and ACCIONA, held a ground-breaking ceremony for their Kathu Solar Park in the town of Kathu, Northern Cape Province, brought together local officials, guests and the project’s South African partners.

Construction has begun following the signing of a 20-year power purchase agreement (PPA) between ENGIE and Eskom, South Africa’s state-owned power utility. The 100MW Kathu Solar Park is expected to be operational in the second half of 2018.

Kathu Solar Park is a concentrated solar power (CSP) project that is being built by Spanish engineering and construction companies SENER and ACCIONA. The plant uses parabolic trough technology specifically designed and patented by the global engineering and construction leader SENER, and is equipped with a molten salt storage system that allows 4.5 hours of thermal energy storage to extend the operational capacity of the plant after sunset. Kathu Solar Park will produce enough power to supply 150,000 homes.

"The Kathu Solar Park project supports South Africa’s strategy of increasing the contribution of renewable power and also underlines our commitment to be a key partner in achieving sustainable energy generation in Africa."

The joint venture between SENER and ACCIONA has been appointed by the ENGIE led consortium to provide engineering, procurement and construction services for the project. Construction began on site in May and is due for completion in the second half of 2018. Approximately 1,200 jobs, of which approximately 36% will be local, will be created during the construction phase.

It is estimated that the Kathu Solar Park will save six million tonnes of CO2 over 20 years and will further promote local economic development through various projects such as a local community trust for the benefit of communities in the John Taolo Gaetsewe District Municipality situated in the Northern Cape and sourcing of other services from local entrepreneurs.

"It is reliable, flexible and dispatchable with reduced carbon emissions, which is excellent for South Africa and sustainability into the future," said SENER Southern Africa regional managing director Siyabonga Mbanjwa.

The consortium is led by ENGIE (48.5%) and includes a group of South African investors comprising SIOC Community Development Trust, the Investec bank, Lereko Metier and the Public Investment Corporation.

Kathu Solar Park has been awarded preferred bidder in the third round of the Renewable Energy Independent Power Producer Procurement Programme (REIPPPP) led by the South African Department of Energy (DOE).