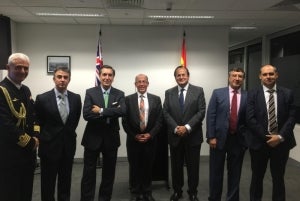 Navantia Australia has announced the opening of its Operations and Design Centre in Technology Park Mawson Lakes, South Australia.

The centre will be the home of Navantia’s engineering and design capabilities in Australia. Navantia has been steadily growing its Australian workforce over many years and this significant milestone is another step forward in its plan to increase its footprint in Australia.

Drawing on Navantia’s broad experience in the design, build and test of complex shipbuilding projects, Navantia will contribute and transfer its extensive skills into its Australian workforce.

The centre is located in the heart of South Australia’s technology hub and will establish the reference for Navantia’s capacity, commitment and expertise for the benefit of the national Defence of Australia.

In addition to the Operations and Design Centre, Navantia additionally has a large team of technicians working in the construction of the AWDs, building up a highly knowledgeable and capable workforce in the shipyard at Osborne.

Through its work to date, Navantia has demonstrated its commitment and capability and is contributing to achieving better progress and putting the project back on track.

As one of the candidates for SEA 5000 Future Frigate, Navantia sees its work at Osborne and the new workforce at the Operations and Design Centre as being ideally placed to provide a seamless, significant and well established team for the execution of the future Australian shipbuilding industry.

Navantia Australia is committed to and excited to be part of the national endeavour to expand the shipbuilding industry in Australia, and is pleased with their recent achievements in this arena.

During the event, Navantia Australia announced the engagement of Mr Warren King as a senior advisor of Navantia Australia. Mr King, one of Australia’s most informed and experienced advisors on Australian defence acquisition and sustainment policy, has joined Navantia Australia for one main reason: the desire to achieve the best outcomes for his country.

He has a strong belief ‘that Navantia has the proven means and capability to be the preferred partner for Australia to turn into reality the Australian government’s ambitious plans for the Australian shipbuilding industry’.

Mr Warren King emphasised the reliability of Navantia Australia in its performance of its contracts with the Commonwealth, and its commitment to keep delivering and to lead the process of maturing the shipbuilding industry of Australia to international standards.

The engagement of Warren King, who has worked on many Australian shipbuilding projects including the very successful Anzac Ship Project, brings great value to Navantia. Mr King’s leadership, experience and expertise across technical disciplines and his understanding of Australian defence increases Navantia’s ability to provide optimum solutions to defence shipbuilding.

This engagement is another step forward in Navantia Australia’s efforts not only to establish a solid foundation for the company in Australia but also it realises the best capabilities possible. It is unquestionable that Warren King brings Navantia Australia to a different, higher level in its capacity to deliver the best outcomes for the Australian Defence Force.

Director of Navantia Australia, Francisco Barón, highlighted that ‘the opening of the Operations Centre provides a solid position to face the new projects’.

President of Navantia, José Manuel Revuelta, assured once again that ‘Australia is an absolute priority for Navantia and we are doing a solid and permanent bet for this country’. Finally, the Ambassador felt ‘very proud to see a Spanish company competing with technologically advanced products and capabilities in such an important market’.

Ferrol is a tiny shipbuilding town in Spain's north-west at the Bay of Ferrol in...

Major Milestone Reached as Keel is Laid for Australian AOR

Navantia S.A has reached a major milestone after laying the keel for the first of...

A Navantia-led team has put forward its tender response for the Canadian Surface Combatant (CSC)...

Navantia and General Dynamics Bath Iron Works have signed a contract to cooperate with the...