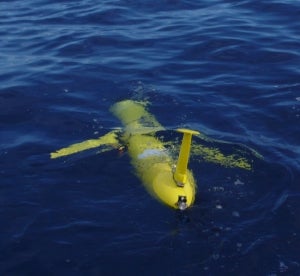 Teledyne Webb Research (TWR) announced today that it has reached the third production milestone in the Littoral Battlespace Sensing – Glider (LBS-G) programme with the US Navy. Along with Teledyne Brown Engineering of Huntsville, Alabama, TWR has completed the delivery of all gliders specified in the first two full-rate production (FRP) contract options to the Navy’s Program Executive Office for C4I. Teledyne Webb Research has delivered 84 gliders under this programme. This FRP Phase Three calls for 32 additional gliders: six 200m gliders and 26 1000m gliders. Production will begin in September of this year and continue through May 2014.

"We are extremely proud that the Slocum glider is now operational with the US Navy as a part of this important program. The Slocum glider is a workhorse in many programs. We continue to deliver gliders for the both the coastal and open ocean arrays for the Ocean Observatories Initiative (OOI) of the National Science Foundation, which further demonstrates the reputation of the gliders as versatile, reliable and efficient", said Teledyne Marine Systems Group General Manager vice-president Thomas W. Altshuler, PhD.

The navy is using both deep and shallow water gliders in the LBS-G programme to acquire critical oceanographic data that will improve the positioning of fleets during naval maneuvers. The gliders are low-cost, use minimal power and can remain at sea for long periods of time.

Gliders were first conceived by Douglas Webb, the founder of Webb Research and a former researcher at the Woods Hole Oceanographic Institution (WHOI). The Slocum G2 Glider is a torpedo-shaped autonomous underwater winged vehicle that measures 2m in length and uses changes in buoyancy along with its wings and tail-fin steering to move through the water.

Teledyne Webb Research will be exhibiting at the 2014 Oceanography international event at the London...

Teledyne Gavia has announced the appointment of two new members of the Gavia Autonomous Underwater...