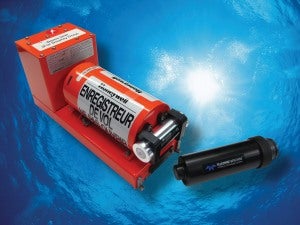 RJE International and Teledyne Benthos today jointly announced the sale of the Benthos aviation pinger product line, which includes the ELP-362D Underwater Locator Beacon, to RJE. In this transaction, the Benthos intellectual property related to the manufacturing of underwater locator pingers for aviation "black boxes" and associated accessories has been sold to RJE, who will build and manufacture pingers for the aviation market. Benthos has manufactured FAA approved pingers since it acquired the technology in 1999. RJE has been an active master distributor of undersea location equipment since 1991. Benthos will retain all other technologies in its undersea location, positioning and communications lines, including pinger beacons, locators and transponders for marine applications. RJE will continue to support the diverse products it manufactures or distributes.

In addition to the transfer of the aviation pinger technology RJE has signed a sales and distribution agreement with Teledyne Benthos, which will allow RJE to market the wide range of Benthos products to their customers.

"We are pleased to see our long history with aviation pingers transition to RJE International," said Justin Manley, Senior Director of Business Development at Benthos. "We also look forward to working with RJE to advance our other undersea acoustic systems such as transponders and modems in the wider marine marketplace."

Robert Jechart, President of RJE International said, "RJE looks forward to manufacturing and directly supporting pingers for our many customers with whom we have developed a long history."

Teledyne Webb Research will be exhibiting at the 2014 Oceanography international event at the London...

Teledyne Gavia has announced the appointment of two new members of the Gavia Autonomous Underwater...

Teledyne Webb Research (TWR) announced today that it has reached the third production milestone in...