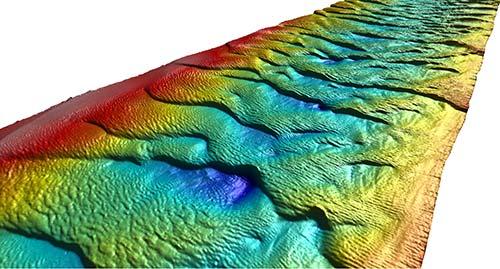 Released to selected trial customers earlier this year, the next-generation software for Kongsberg Maritime’s GeoSwath Plus shallow water multibeam echo sounder has already been put through its paces on the river Douro in Northern Portugal by one of the country’s leading survey companies, Lagoa do Ruivo Survey (LRS).

The new GS4 all-in-one survey package is a completely re-worked version of the GS+ software, providing higher performance and a contemporary look and feel. The software is now available to all GeoSwath Plus users.

Sand ripples on the bar entrance to Setubal harbour imaged with the GeoSwath Plus multibeam and the new GS4 survey software.

The user-friendly GS4 all-in-one survey package has been a significant asset for LRS’s latest projects. Recent surveys using the software include high-resolution bathymetry used for planning a route for a cable from an offshore wind farm; the search for containers lost at sea during a storm; monitoring craterisation of the seabed surrounding an inlet pipeline for a fish farm; monitoring of sand dunes; evaluation of dredged volumes in a major port, and evaluation of the silting up of the main doors of a large dry dock.

LRS has been a GeoSwath user since 2002, when it first deployed the GeoSwath 32 250Khz bathymetry system to survey 200km of the river Douro. The company had been testing various multibeam systems but chose GeoSwath Plus for its quality of the data, affordability, compatibility, and the considerable coverage it provides in shallow water.

Today LRS uses the advanced GeoSwath Plus multibeam system from Kongsberg Maritime, and considering its long-term use of the technology, it was an ideal candidate for early use of the new GS4 solution. LRS has tested a beta version of GS4 for six months and was among the first customers to enjoy new features in all stages of their workflow, from line planning and acquisition through to post-processing.

Other GS4 functionality includes calibration, and DTM and side scan mosaic production and visualisation.

Scientists have been using sonar and echo sounder systems on vessels for decades to conduct...