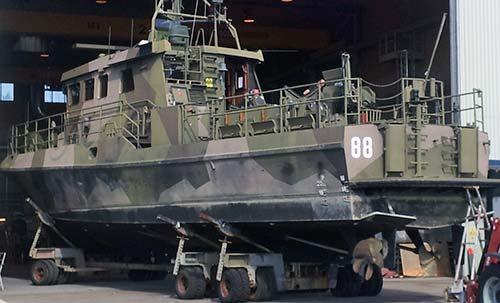 The new sonars will replace the previous model SIMRAD SS576 sonars first installed in 1996 on-board the Tapper-class (or Bevakningsbåt 80), with the purpose to protect and patrol Swedish coastal waters.

The Tapper-class Fast Patrol Boats operate in extremely shallow waters, and require Sonar capable of high-performance in such environments.

With 22m in length and a displacement of 62t, the Tapper-class Fast Patrol Boats operate in extremely shallow water, and require sonars capable of high-performance in such environments.

The Kongsberg Maritime sonar selected for this upgrade will be used for anti-submarine warfare (ASW), mine and obstacle detection and navigation, and is designed for use in shallow water.

Kongsberg Maritime naval sonar product sales manager Thomas Hostvedt Dahle said: "The Swedish Navy is one of the most experienced Navies with regards to operation of sonars in shallow and challenging waters so we are proud to have the preferred sonar solution for protection of the Swedish coastline.

"Our sonars have acoustic properties specially developed for shallow water and our design is compact in order to enable installation also on very small ships. This supports the ASW tactics of fighting submarines in shallow water with the use of several smaller ships that are equipped with sonars. We look forward to the ship being delivered with upgraded sonars to the Swedish Navy, in less than a year."

The rebuild and lifetime extension project has already started, with the first vessel being prepared for the work in the shipyard.

Scientists have been using sonar and echo sounder systems on vessels for decades to conduct...