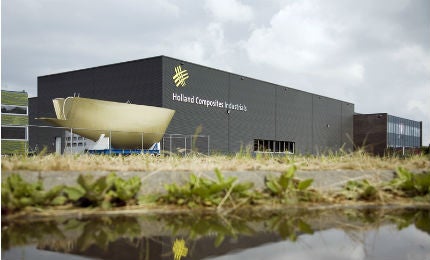 Holland Composites develops and manufactures marine composite products, with or without acoustic properties. Lightweight composite products are specifically designed to withstand the marine environment, without compromising structural properties and eliminating the constant need for surface treatment and re-painting.

Our products are technically designed to cater for specific applications and lifetime performance. Key reasons as to why composites may work well in your fleet include:

A sonar dome is an acoustically transparent housing that surrounds and protects a marine ship’s sophisticated sonar transducer array. This sonar transducer array is used for underwater detection and navigation. The sonar dome permits acoustic energy to pass through with minimal sound degradation. The bow dome is mounted on the keel of marine vessels and is a hydro-dynamically shaped composite structure.

A composite sonar dome outperforms a dome made from traditional materials in terms of durability as well as minimum interference to sound transmission and reception for enhanced detection and classification of underwater targets, and overall enhanced performance.

Holland Composites pioneered the development of composite surface ship sonar domes for anti-submarine surface combatants and developed a production technique which allowed the domes to be made in one single production run, rather than manufacturing two halves, which would be bonded afterwards. This technique ensures an extremely strong and durable sonar dome, while maintaining the best acoustic properties.

Whilst the advantageous properties for submarine sonar windows are similar to those for surface ships, there are a few additional benefits.

Reduced weight is of higher priority for submarines, and the absence of a magnetic signature is more appreciated too.

Both GRP and CFRP can be used for large three-dimensional shapes and when superior transparency is required to cover specific sonar windows.

The baffle is the area in the water directly behind a submarine or ship through which hull-mounted sonar cannot hear. This blind spot is caused by the need to insulate the sonar array, commonly mounted near the bow, from the noise of the vessel’s machinery.

As a sonar array is very sensitive to underwater sounds, it must be protected from the noise generated by machinery on the vessel on which the sonar is installed. Otherwise, its own noise may drown out other sonar targets.

To reduce noise, sound-absorbing material is placed between the sonar and the rest of the vessel. Such material is typically incorporated into rigid panels, and the combination of shape and materials determine the level of reduction.

Founded in 1992 as a high-end composite shipyard, Holland Composites has matured into an organisation capable of handling complex and large international composite manufacturing projects.

Holland Composites has state-of-the-art facilities and machinery. Our team of skilled craftsmen work with VARTM and pre-preg materials.