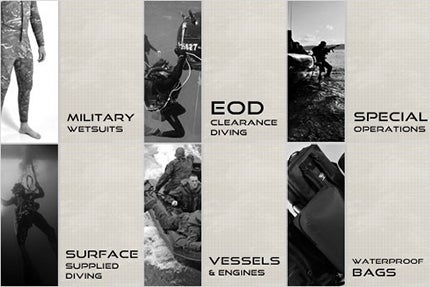 The firm was awarded its first military contract nine years ago; it now owns seven contracts worldwide and is the prime contractor to the British Ministry of Defence for drysuits and diving equipment.

As well as the military, the Northern Diver manufactures drysuits for sport, commercial and rescue applications around the world. Wetsuits for similar purposes are available.

In terms of military drysuits and wetsuits, the company supplies products of all categories for a wide range of combat scenarios.

Northern Diver has the capability to manufacture bespoke military drysuits and wetsuits for the unique working conditions that military personnel can be pitted against. Those with enquiries are invited to contact the firm.

At the technical end of the scale, the firm manufactures non-magnetic drysuit systems for EOD and special operations drysuits that can be infra red reflective (IRR) coated, breathable, lightweight, ultra-quiet and fire retardant.

The firm also holds a licence to manufacture drysuits in multi-terrain pattern (MTP). Drysuits with this pattern are often used above and below the surface in warzones.

For use in hazardous contaminated environments, the firm manufactures high-grade rubber drysuits. These drysuits have undergone chemical permeation testing at the Austin Institute in Texas and are reported to give excellent protection from dangerous chemicals.

As well as non-magnetic drysuits, Northern Diver has the capability to supply all of the non-magnetic items that EOD divers require to carry out this process, stocking everything from jackstays and reels to sonar markers and mine recovery outfits.

The firm has reported that it is well into the development stages of an underwater sonar and GPS system, amongst other projects.

As well as its Breathable Lightweight Drysuit, examples of the firm’s special operations equipment include its non-magnetic range, including items from drysuit valves to fins, and its Extended Duration Breathing Apparatus (EDBA).

Northern Diver also recommends its bespoke manufacturing service for special operations, due the often-unique nature of this field.

Northern Diver is widely used in the commercial diving industry, including surface-supplied diving.

The firm also has the capability to supply air distribution panels, recompression chambers and more.

Northern Diver created the Osprey brand of rigid inflatable boats (RIBs). Under the firm’s tenure, Osprey supplied more than 2,000 rigid inflatables to customers around the world and featured in the Scotland RIB Grand Prix, amongst other events.

The firm has now resurrected its involvement in boats. It can supply RIBs of different sizes to the military, with Suzuki engines if required. As well as boats, the firm can provide diver propulsion vehicles.

In terms of bags for military divers, Northern Diver manufactures holdalls, dry sacks, Bergen dry bags, dry holdalls and even wheeled bags for travelling. This list is not exhaustive.

Procuring specialist military diving equipment, by the very unpredictable nature of what it will be faced with in combat, is not as straightforward as other items. Those in need of equipment are encouraged to contact Northern Diver. A member of its dedicated military team can guide customers through the multitude of equipment and technology that is available.