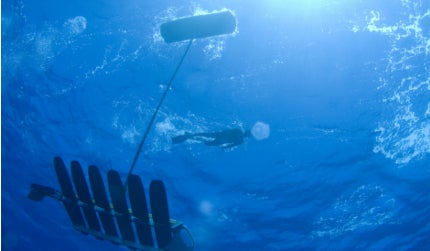 Liquid Robotics is an ocean data services provider and developer of the Wave Glider™, the world’s first wave-powered, autonomous marine robot. This reliable and versatile platform for national security and defense eliminates the economic and risk barriers in ocean data collection.

Founded in 2007, Liquid Robotics is quickly becoming a provider of unique systems for navies around the world. Unmanned Wave Gliders provide a unique and valuable service to national security and defense that manned devices cannot. The functionality of the gliders ranges from port security and anti-submarine warfare, to surveillance, communications, weather observation and maritime domain awareness.

A persistent, configurable, autonomous marine vehicle, the SHARC (Sensor Hosting Autonomous Remote Craft) variant of the Wave Glider has been designed as a versatile platform hosting an array of sensors and devices, ideal for a wide range of national security and defense applications. Acoustically silent and with a low visual and radar signature, SHARC harvests all its energy for propulsion mechanically from ocean waves. Power for onboard computing, sensors and communications devices is provided by solar energy.

SHARCs can operate autonomously or be controlled by an operator located anywhere in the world, connected securely via satellite and a browser interface for real-time 24/7 access to data. Operating individually, SHARC can provide access to remote areas to gather data, perform surveillance, or act as a communications gateway to existing subsea devices. With no energy restrictions, missions can last for months or up to a year of mobile operations or station keeping.

As part of a deployment of marine assets, or operating as a ‘swarm’, SHARCs can provide broader cooperative underwater sensor capabilities and other functions with dramatic cost savings.

SHARC’s unique two-part architecture harnesses the oceans’ wave energy to provide forward thrust. Even the slightest wave motion on the ocean surface will yield forward motion of the Wave Glider, regardless of the direction of wind or waves. Two solar panels on the SHARC charge the batteries that power all of the sensors.

Due to the use of renewable and readily available wave and solar energy, SHARC can be deployed for up to a year without the need for human intervention to refuel, recharge or maintain the device. This feature makes SHARC ideal for long lasting surveillance, reconnaissance and detection operations.

Applications for SHARC include:

Liquid Robotics has been in production since 2009 and has shipped more than 130 Wave Gliders and SHARCs globally. They are being adopted by customers for deployment worldwide. Several Wave Gliders have travelled from San Francisco to Australia, covering over 9,000 miles on their record-breaking Pacific crossing (PacX) mission. Liquid Robotics customers are using SHARCs and Wave Gliders for national security, defense and scientific missions.

If you are interested in using or obtaining more information about the SHARC, we encourage you to get in touch with our US or international sales teams.

Liquid Robotics®, a leading provider of autonomous ocean robots and high-value ocean data services, has announced that it has closed a $45m Series E funding round led by Riverwood Capital, with participation from existing investors, including VantagePoint Capital Partners.

Liquid Robotics®, a leading provider of autonomous ocean robots and high-value ocean data services, has announced that it has closed a $45m Series E funding round led by Riverwood Capital, with participation from existing investors, including VantagePoint Capital Partners.