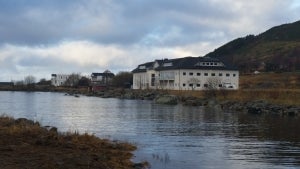 After some years of preparation, STADT has moved into its new centre in Gjerdsvika, Norway, and simultaneously celebrated its 30th anniversary as a technology company.

The Maritime Centre is located in the harbor of Gjerdsvika on the mid-west coast of Norway, south of Aalesund.

The new centre consists of several major companies in a maritime cluster, developed over several generations. STADT has built the new facility in addition to existing ones, which has a total area of 3,600 square metres of working space.

Development, testing and engineering facilities are now well integrated in this very modern building. The investment is €5m for this extension of the Maritime Centre.

The next investment will be to improve the harbor facilities, a government financed project of more than €15m.

Hallvard Slettevoll, founder and CEO of STADT, says that the future for their company ‘seems good’, since their sustainable, patented and awarded AC drive technology has found its markets within various shipping segments, not only offshore.

The company has now been in business for 30 years, gone through a major growth period with their fifth generation of drive technology and expects further international growth in their new facilities.

STADT Lean propulsion technology is available in many options that control the propeller power by...

The Navy requires efficient vessels that are safe and fully operational in all seasons and...

The Guidelines to Electric Propulsion in the Naval Industry

STADT LEAN DRIVE is specially developed for marine propulsion systems, where it is used together...

Many countries are searching for more sustainable power systems for their naval fleets. Electrification has...