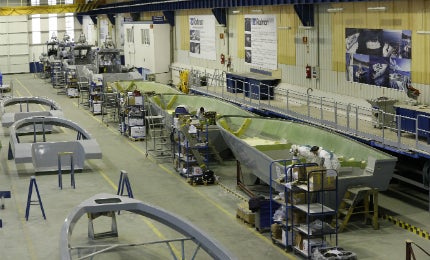 Rodman provides a wide range of fast patrol boats between 11m and 45m in length, with extensive flexibility to design and construct its units on a case-by-case basis to match any customer’s individual technical specification, arrangement and operational performance as required.

Founded in 1974 with headquarters in Vigo, Spain, Rodman operates four shipyards, two located in Spain and two in northern and southern Portugal. The company employs 500 staff, including a highly-qualified design and production naval architects team, and an experienced production and engineering staff and workforce.

Rodman has a range of hull moulds available, specifically designed for constructing fast patrol boats which cover most of the needs for coastal and offshore surveillance and law enforcement missions. These fast patrol boats include:

Our fast patrol boats can be specifically designed to match the customer’s operational requirements by offering different deck and superstructure arrangements, with flexibility to create a customised deck and internal layout.

Machinery, propulsion gear, materials and other boat equipment can also be customised to match the operational performances intended.

Rodman also designs and constructs fast boats for various applications, such as Search And Rescue (SAR) boats, pilot boats and fast passengers boats. They all have the same flexibility, design and construction quality as our other products, and possess the same technology and facilities as our fast patrol boats,

Rodman is fully committed to quality. We ensure the best designs and shipbuilding levels by using the best raw materials and equipments available in the marketplace. In recognition of this, the company is ISO 9001, ISO 14001 and NATO PECAL / ASAP 2110 certified.

Checks and tests are carried out on all frames to ensure we continue to comply with quality assurance certifications. We also fulfil all boat-classification society requirements.

Our in-house quality-assurance laboratory, fully equipped with chemical and mechanical-test equipment, is managed by qualified and independent staff who monitor and audit the design and production procedures to ensure maximum quality.

Rodman designs and constructs its fast patrol boats for most of the Spanish government agencies involved in maritime surveillance, as well as for custom, coastguard, fishing inspection and naval applications, amongst others.

Rodman has also been present in the international market since the early 1980s, having exported a large number of its fast patrol boats to countries in Europe, Africa, Central America, South America, the Middle East and the Far East.

After a month of thorough negotiations, Rodman Polyships has reached an agreement with the Asian company China Sonangol, for the construction and supply of 40 high-speed patrol boats and ten passenger catamarans with capacity for 350 people.