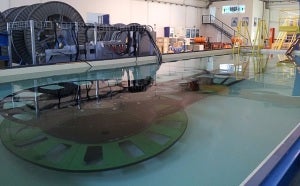 SAES has successfully completed integration testing of the deployment and recovering system (TAHS) with digital towed sonar (DTAS), also made by SAES, ending a comprehensive setting-to-work (STW) test plan on land in the own facilities, with more than 40 deployments completed without failure.

Last December, SAES finalised the integration testing of the system for deployment and recovering (TAHS) with digital towed sonar (DTAS) at its sonar test facilities, located in La Palma, Cartagena. More than 40 deployment/recovering manoeuvres has been completed, the equivalent to 40 missions, since normally sonar is deployed only once per mission.

In addition to this, these facilities are prepared to conduct training and faults simulation of towed array sonar to submarine crew, since this is an exact replica of the system to install on S-80.

"The next step is the implementation of both systems on board the submarine and execute the Harbor Acceptance Test (HAT)" said the program manager.

DTAS provides a tactical advantage to the submarine and TAHS adds the capability to automatically deploy and recover the sonar without surfacing, facilitating navigation and manoeuvrability.