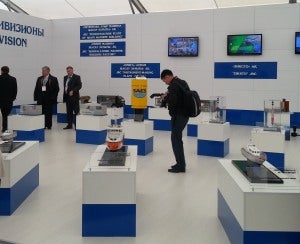 SAES and GIDROPRIBOR have signed a memorandum of cooperation for joint production and the commercialisation of Diver Detection Sonar (DDS-03).

This agreement sets the stage for the introduction of the high frequency sonar DDS-03 into the Eurasian region (area of influence of the Caspian Sea). The high-frequency active sonar DDS-03 is specifically designed for the detection of underwater threats such as divers and manned and unmanned underwater vehicles (SDV, ROV or UUV), offering protection and surveillance against the potential threat they could represent in ports, critical facilities, shipwrecks, environmentally protected areas, special events and anchored boats.

As a result of this agreement, the DDS03 has been presented at the stand of GIDROPRIBOR in the Kazakhstan Defense Exhibition KADEX 2014, arousing the interest of visitors, since in recent years has increased awareness around the need for protection of ports, vessels and critical infrastructure against underwater threats in the Caspian Sea area. This protection requires the use of highly specialised sensors, characterised by a high probability of detection and low false alarm probability, such as the DDS03.

SAES has strengthened its commercial efforts on the Eurasian area by attending the MAST EurAsia 2014 Conference, a specialised conference on magnetic and electrical radiations emitted by cruise ships. SAES specialises in underwater multi-influence measurements (acoustic, magnetic, electrical, seismic and pressure) and is conducting a series of studies designed to mitigate the lack of information of non-acoustic radiation of ships.

In the knowledge area of underwater signatures, the company is positioned at the forefront of the market with the SAES’ manufactured last generation Multi-influence Range System (MIRS).