JEUMONT Electric, a century-old world-class pioneer in electrical energy technologies, has a global offering in the field of HV/LV electrical rotating machines and conversion equipment. 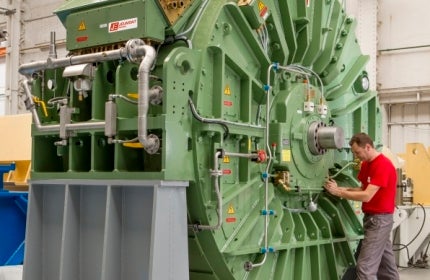 JEUMONT Electric, a century-old world-class pioneer in electrical energy technologies, has a global offering in the field of HV/LV electrical rotating machines and conversion equipment. The company operates in a variety of markets, including general industry, oil and gas, energy production, and marine propulsion.

JEUMONT Electric has been part of the Altawest group since 2007, which aims to provide global solutions in energy generation and conversion.

Energy generation and conversion lie at the heart of JEUMONT Electric’s activities. The firm is committed to taking up the challenges of the 21st century, responding to the energy demand, improving energy efficiency, and building a world that is respectful of mankind and the environment.

JEUMONT Electric is a world leader in the field of electrical machines and equipment onboard military or civilian vessels. Having built up vast experience supported by significant references, the company is capable of meeting the most stringent requirements in terms of:

JEUMONT Electric’s electrical machines and converters comply with maritime requirements and can be upgraded for use in harsh environments.
JEUMONT Electric can supply onboard power generation, power distribution, propulsion systems and auxiliary motors.
Stator rewinding by JE.

The range of electrical machines and converters offered by JEUMONT Electric has been designed to comply with maritime requirements and, more specifically, can be upgraded for use in harsh environments when required.

JEUMONT Electric has the capability to offer a fine balance between innovative products with market advantages in mass, volume and reliability, while respecting the commercial off-the-shelf (COTS) principles.

References in the marine military industry

For decades, JEUMONT Electric has been working with major shipyards, naval architects and ship designers, such as the French DCNS, FINCANTIERI, KOCKUMS, ASC… regarding the design and build of complete energy-propulsion systems. The list of references is outstanding.

In France, JEUMONT Electric will supply the main power generation onboard the new BARRACUDA SSN submarines. The company also has substantial prospects in the surface ships market.

Within the framework of the French-Italian programme of the European frigates (FREMM), JEUMONT Elecric is supplying the electrical propulsion system in the context of a CODLAG/CODLOG arrangement.

The America class amphibious assault ships are being built by Northrop Grumman Shipbuilding for the US Navy.

A series of four Project 21180 multi-purpose vessels are built by JSC Admiralty Shipyards for the Northern Fleet of the Russian Navy.

The RPB 33 coastal patrol boats are designed to enhance maritime surveillance capabilities of the naval forces.