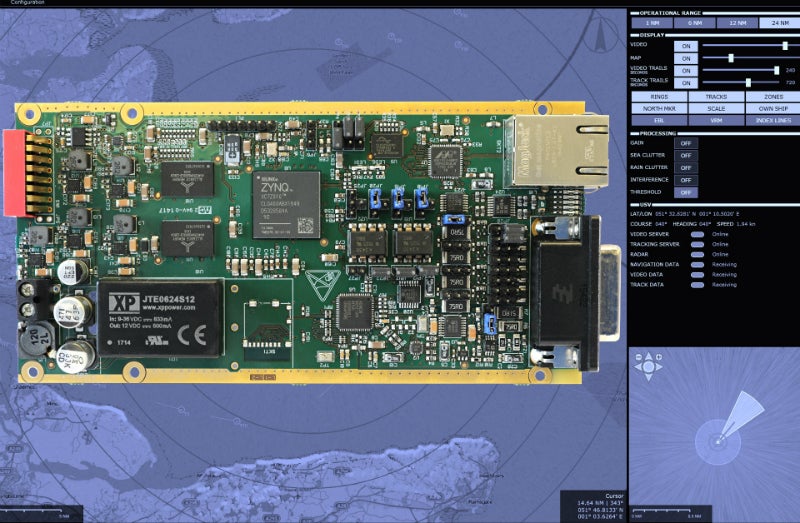 The HPx-346 is designed to convert analogue radar signals into a standard open network data stream such as ASTERIX CAT-240. The card provides a cost-effective way of importing analogue radar data into a modern display.

The small form factor (149x74mm) HPx-346 card features a combined ARM / FPGA system-on-chip processor to handle the radar acquisition and data conversion. The card may be configured through a web interface with settings made to the card for autonomous operation. Alternatively, a programming API is available to permit remote control and set-up.

Cambridge Pixel CEO David Johnson said: "We have seen a number of applications that require a compact, low-power, standalone unit capable of converting radar signals into network data. For example, the HPx-346 would enable existing radars on a ship or commercial boat to be accessible in an ECDIS (electronic chart display and information systems) display.

"The HPx-346 complements our existing range of HPx PCI and PCI Express radar input cards, and gives system integrators a choice between the small size and low power of the HPx-346 and a full PC-based radar server incorporating our HPx-200 or HPx-400e series cards."

The HPx-346 supports a wide variety of signal types and input voltages, including differential and single-ended signals with selectable signal levels and input impedances. This allows connection to a diverse range of commercial and military radar types such as those from Furuno, JRC, Kelvin Hughes, Koden, Raytheon, Sperry, and Terma. The HPx-346 accepts radar video, trigger and azimuth signals in the form of ACP / ARP.

The HPx-346 can be configured as a standalone radar processor with the card installed within existing equipment, or supplied in a compact enclosure. A development kit is available comprising the card, power supply, RadarView Software and a software development library.

Cambridge Pixel will be showcasing its HPx-346 card and other products on stand S4-352 (South hall) at the DSEI Defence and Security show in London, UK, between 12-15 September.

Sensor Processing and Display Solutions for the Naval Industry

Cambridge Pixel is an employee-owned specialist sensor processing and display company based near Cambridge in the UK.