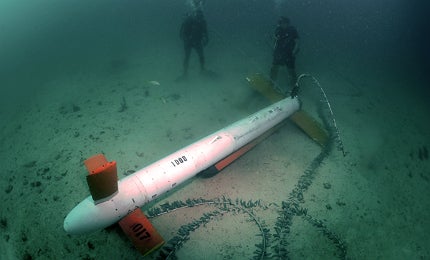 US Navy divers often have to operate in deep seas to carry out missions such as mine clearance, underwater repairs and welding, submarine rescue, and, in the case of Navy SEALS and Marines, potentially espionage and sabotage. However, all solutions to date sacrifice some combination of practicality, speed of deployment and retrieval, mobility and dexterity, meaning that whatever technology is selected for a specific mission presents a degree of compromise.

A new solicitation from US Naval Sea Systems Command (NAVSEA) is seeking robust but lightweight diving technology that would enable a diver to operate at depths of 1,000ft as easily as if he were wearing a wetsuit, without having to sacrifice any of the benefits of current systems.

"All solutions to date sacrifice some combination of practicality, speed of deployment and retrieval, mobility and dexterity."

Traditional diving suits leave divers’ legs and arms unencumbered for tasks that require careful navigation and manipulation, but cannot protect them from the pressure and cold encountered at significant depths. Deepsea diving combined with overly rapid descent and ascent can result in a number of serious and potentially fatal conditions, some of which only come to light after repeated deepsea exposures.

The best known of these is decompression sickness, a range of conditions resulting from gases dissolved in the blood coming out of solution into bubbles in the blood stream. When this occurs in the joints it is known colloquially as "the bends". Other acute effects include nitrogen narcosis, oxygen toxicity and high pressure nervous syndrome, plus the chronic condition osteobaric necrosis that can result from repeated dives. These effects can only be mitigated by the use of expensive gas mixtures and lengthy decompression schedules, which often limit the time a diver can work on the sea bed.

Side-stepping potential physiological hazards and logistical constraints on human pilots altogether, underwater remotely-operated vehicles (ROVs) and mini-subs have come a long way in enabling deep-water operations, but can only deploy from a select range of platforms. Propeller propulsion and a limited range of remote control grippers, tools and manipulators can make delicate operations awkward to carry out, and they may not be equipped to deal with a task that remains unclear until viewed up close.

Given the secrecy and military urgency of some underwater missions, diver decompression or retrieval of cumbersome technology can take too long and be too conspicuous when enemy vessels are nearby.

Taking the pressure off

The US Navy gets around this by using atmospheric diving suits. Looking a little like the earliest clunky Victorian diving equipment, they are constructed from resilient materials that can withstand the pressure and cold encountered at depth, leaving an air gap around the wearer at a constant pressure of one atmosphere – the same as at the surface. This eliminates the need for decompression procedures.

"Deepsea diving combined with overly rapid descent and ascent can result in a number of serious and potentially fatal conditions."

In 2007, the navy started using the Atmospheric Dive Suit (ADS) Hardsuit 2000 made by OceanWorks International, based in Vancouver, Canada, and an associated Launch and Recovery System (LARS), to support submarine rescue. The Hardsuit 2000 is designed to withstand underwater pressure at 2,000 feet, an improvement on previous models that had only been able to go down as far as 1,200 feet.

Its claim to be the safest deep diving system available was put to the test in 2007, when chief navy diver (DSW/SS) Daniel P. Jackson of the Navy Reserve Deep Submergence Unit (DSU) was selected to certify the ADS suit for use by the navy. He submerged to 2,000 feet off the coast of La Jolla, California, setting a new record.

As well as eliminating any pressure-related physiological risk and eliminating decompression time, its rigid format also protects the wearer from marine life and hazardous environments. Offering similar performance to divers with the instrumentation, data and mobility of an ROV – it comes with robot-like manipulators on the end of both arms – the diver can also use his own 3D vision, hearing and touch feedback from within the suit, and communicate back to a command centre. Although the legs are free for limited sea-bed walking, the majority of propulsion and steering is carried out using dual-plane propellers mounted on either side of the suit.

The new solicitation, however, implies the navy is prepared to sacrifice some of the depth to which the ADS Hardsuit 2000 can descend in return for increased agility, and decreased bulk and weight.

"In 2007, the navy started using the Atmospheric Dive Suit (ADS) Hardsuit 2000 made by OceanWorks International."

According to NAVSEA, current suits behave more like piloted submersibles, weighing in at more than 1,000 lbs and with a cumbersome shape and size that constrains their use and requires specialist equipment to deploy and retrieve, which can only operate from a limited range of platforms. NAVSEA wants a lightweight suit weighing less than 400 lbs that would enable a diver to use his own legs to swim with fins, rather than relying on a powered propulsion system, and dive from a wider range platforms, including small boats, without specialised support equipment.

NAVSEA is inviting tenders to help the navy design and develop a lightweight, swimmable, one-atmosphere diving suit for use in seawater that is capable of withstanding pressures up to 1,000 feet of seawater (fsw) – half the depth of the ADS Hardsuit 2000.

The navy intends to use the robust new diving suit for expeditionary diving and salvage forces, and the retrieval of high value material that the awkward manipulators of ROVS cannot manage. Divers wearing it could work in austere environments where a large mixed-gas or saturation system for the compression / decompression process for regular divers would be impossible to deploy, or carry out rapid reconnaissance and survey of a work site before such equipment is deployed.

As part of the first phase of the programme, participants will determine the material and construction technologies required to design and produce a swimmable one-atmosphere suit with a 1,000 fsw working depth. They will be required to produce suit designs with optimal diver ventilation, flexibility and mobility for a broad range of missions, and identify any potential technology / capability trade-offs.

Phase two will involve the construction of a physical prototype of the deepsea diving suit to determine flexibility, mobility and ability to withstand pressure at depth, as well as working out how it would be certified for military use. Construction of a production deepsea diving suit and its certification by the Supervisor of Salvage and Diving (NAVSEA 00C) forms the third and final phase.

Should NAVSEA’s vision of this lightweight, agile suit come to fruition, the day may dawn when heavyweight Victorian-style diving suits may only be seen on the most tenacious of charity marathon runners.