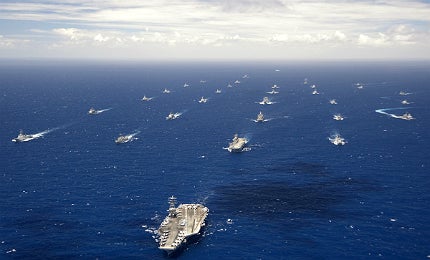 With threats from North Korea becoming increasingly belligerent and bellicose, the international community has responded in kind, making it clear that nuclear proliferation and antagonistic war declarations will no longer be tolerated.

While a diplomatic resolution is obviously the favoured result, this hasn’t prevented neighbouring nations and their allies, principally the US, moving naval assets into the area in order to ensure that any potential action from North Korea can be dealt with efficiently.

With airstrikes and any potential ground conflict considered a last resort, naval operations arguably represent the best possible means of ensuring the region’s safety without triggering any further escalation.

This is, for all intents and purposes, the kind of situation the Republic of Korea (ROK) Navy has been preparing for. Countless drills conducted alongside the US Navy, to much distaste and condemnation from their northern neighbours, have ensured that South Korea’s naval force is ready to best protect its citizens from an attack.

The cornerstone of this defence is the Aegis system, installed upon the Sejong the Great-Class destroyers, the first of which was launched in May 2007 as part of a naval modernisation programme. The vessels combine the Aegis combat system with SPY-1D multifunction phased array radar to produce a system capable of intercepting ballistic missiles launched from the north.

The ROK Navy has approximately 170 commissioned ships, comprising of 12 submarines, 100 corvettes and patrol craft, 20 frigates and destroyers, as well as other fleet auxiliaries. Having undergone a sustained period of modernisation since the 1990s, South Korea’s naval force is alleged to be one of the better equipped and prepared navies in the region, routinely participating in international drills and anti-piracy operations.

Despite its considerable presence being spread across the Pacific and Atlantic oceans, the US Navy still has more than enough assets in the region to significantly contribute towards the peacekeeping mission on the Korean Peninsula.

"The US Navy still has more than enough assets in the region to significantly contribute towards the peacekeeping mission."

The USS McCain was recently moved to the Korean Peninsula to serve exactly that purpose; sent to the region in the wake of threats of nuclear war from Kim Jong-un’s regime. The Arleigh Burke-Class destroyer, which is usually stationed at Yokosuka Naval Base in Japan, boasts similar ballistic missile defence capabilities to South Korea’s Sejong the Great-Class destroyers.

Given the delicate diplomatic situation, the US operation within the Korean Peninsula is likely to remain a peacekeeping one, ensuring that its navy’s presence is seen and not necessarily felt. While North Korea has made repeated threats to strike mainland US with a nuclear missile, Kim Jong-un’s regime is highly unlikely to possess such capabilities, with a far greater threat being a strike on US territory in Guam. The USS McCain will join other assets of the US Pacific Fleet, such as the aircraft carrier USS John C Stennis, Los Angeles-Class fast-attack submarine USS Charlotte and the US Navy’s first Littoral Combat Ship, the USS Freedom.

Japan ready to defend itself

Japan’s constitution forbids the possession of offensive capabilities such as aircraft carriers, strategic bombers, marine units and ballistic missiles, leaving the nation to defend itself from aggression through more reserved means. Aegis, perhaps predictably, once again forms a central role in this defence.

With 21 submarines, six light frigates, 30 frigates and eight destroyers, Japan’s Maritime Self-Defense Force will not become embroiled in the conflict unless attacked, yet the nation is remaining alert considering the bellicose nature of North Korea’s more recent rhetoric. Within the country’s perceived strike range, Japan’s relatively modest fleet will be ably assisted by the US.

One benefit of North Korea’s secrecy is the scarcity and questionable reliability of information relating to its military might. While the nation will attest to possessing a naval force capable of fending off any potential aggressors, news stories have poured doubt on images displaying a large inventory of vessels and weaponry, claiming them to have been doctored.

"One benefit of North Korea’s secrecy is the scarcity and questionable reliability of information relating to its military might."

The fleet is supported by extensive numbers of torpedo and patrol boasts, but vessels that are unlikely to pose too much of a threat to the technologically superior countermeasure systems possessed by US and South Korean vessels.

Given the comparative strengths and weaknesses of vessels in the region, the North Korean naval force is unlikely to put up much of a resistance despite its rumoured inventory. Perhaps typical of a nation operating under a shroud of secrecy, naval capabilities appear to have passed North Korea and Soviet-era frigates will pose little threat to the significantly more advanced vessels of the US and South Korea.

The fact remains, however, that the nation could do far more damage to global security through the launch of a ballistic missile fitted with a nuclear warhead, switching the mission at hand to one of key importance. Aegis’s much vaunted capabilities have given weight to the system’s soaring popularity, and it’s these capabilities that are going to be truly tested in coming months.

Video feature: no sting in the tail for US Navy robot jellyfish

Researchers have developed a giant lifelike robot jellyfish for a US Navy funded project, which could pulsate undetected through ocean depths carrying out secretive surveillance missions.