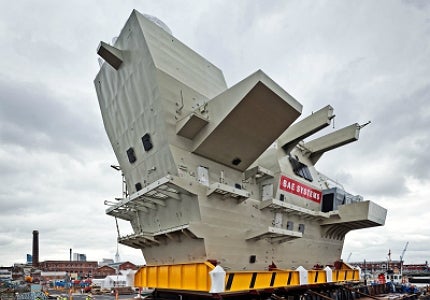 When BAE Systems announced last week that the berth cranes, used to load cargo onto ships, would be removed from the Govan shipyard in Scotland, it was clear that the omens were not good for the centuries-old shipbuilding industry in Scotland. One Govanite lamented in the local media: "That spells the end of it, doesn’t it?"

Indeed it could be the end, as BAE Systems confirmed it was consulting with unions on 1,775 job cuts across three UK shipyards, including Portsmouth, Scotstoun and Govan. To much consternation, the company confirmed it will end shipbuilding in Portsmouth, the last facility in England that can build surface warships. The job losses are the result of the completion of work on the Royal Navy’s new Queen Elizabeth-Class aircraft carriers and a lack of future orders for BAE Systems.

In response, the UK Ministry of Defence has announced that it will purchase three offshore patrol vessels from BAE Systems to bridge the gap between the aircraft carriers and the new Type 26 Global Combat Ship frigate. But jobs will still have to go.

"Indeed it could be the end, as BAE Systems confirmed it was consulting with unions on 1,775 job cuts across three UK shipyards."

The timing of the job losses could not come at a worse time for the UK Government, which is ferociously campaigning to keep Scotland as part of the United Kingdom. Prime Minister David Cameron is acutely aware of the political consequences of job losses in Scotland with an independence referendum less than a year away.

"Shipbuilding in Glasgow has such a large political pull. If you look at what has been going on in the referendum campaign, the west of Scotland has been a little more sceptical of the SNP, a little more sceptical of the Yes campaign. It has more invested in Britain’s military complex and if you see jobs going away in that area, it might weaken some of the more Unionist sympathies," Dr Phillips O’Brien, director of the Centre for War Studies at Glasgow University told the BBC.

BAE Systems announced today that following detailed discussions about how best to sustain long-term capability in delivering warships, they agreed Glasgow would be the most effective location for manufacturing new ships. Though some would say this is just a game of ‘political football’.

The British Government’s intervention in last month’s union dispute at the Grangemouth chemical and refinery plant shows just how sensitive job losses are. When owners Ineos announced that it would axe 800 and close the refinery – a significant contributor to the local economy – there was a concerted effort on all sides to avert a local economic meltdown.

The Grangemouth intervention could give an insight into how the UK Government will respond to potential BAE Systems job cuts. In total, 3,200 people are employed at both Govan and Scotstoun sites and a further 1,200 are employed in shipbuilding in Portsmouth. So it’s no surprise that Philip Hammond has spoken on the subject today in the House of Commons.

Hammond said the UK Government remains committed to the construction of the Global Combat Ship but "will not make the decision [to buy] until the design is more mature". This means the contract for 13 new Global Combat Ships, which was expected to be announced soon, has yet to be signed. The end of shipbuilding in Portsmouth shows that when a decision is made, it will not be enough to save the UK’s present shipbuilding infrastructure.

"The timing of the job losses could not come at a worse time for the UK Government."

More UK orders for the Type 26 or even Type 45 destroyer are a potential answer but, as we have seen in recent years, increased defence spending is hard to justify. With so many developing countries increasing their naval expenditure and capabilities, shouldn’t the UK follow suit? The order for three OPVs could be too little, too late.

Export markets are also one area which BAE Systems are keen to exploit, with interest in the Type 26 frigate already being expressed by Brazil, Canada, Australia and New Zealand. But these orders are less than forthcoming, with Canada in particular backing away from the project.

The harsh reality, however, is that many countries like Brazil are keen to buy defence equipment from BAE Systems but do not want it built in the UK; instead, they want it to be build by Brazilians in a shipyard in Rio de Janeiro. This can be seen with Brazil’s recent acquisition of BAE Systems’ Offshore Patrol Vessels, three were built in Portsmouth and future orders will be built in Brazil. In this sense, job losses should not be all that surprising.

"Export markets are also one area which BAE Systems are keen to exploit."

The decision to cut jobs will cause headaches for Scottish National Party leader Alex Salmond, who is fighting the cause for Scottish independence. Industrial areas around Glasgow, like Govan and Scotstoun, are meant be the engineering powerhouses for a future independent Scotland. This economic strategy will be obliterated overnight if potential closures and job losses were to take place.

It’s not clear how an independent Scotland would be able to keep these shipyards open. Even more opaque is what would happen if the Type 26s were built in Glasgow, which seems most likely, and Scotland was independent. If Portsmouth was to close and Scotland gain independence, it would mean England’s entire capacity to build complex warships would be in another country.

At present, the main reason the shipyards will remain open is because of the UK Government’s ability to invest huge sums into the industry. An independent Scotland will not have anywhere near this type of economic power. So, job losses present huge challenges for all sides, political and industrial. Most importantly, the loss of jobs will be most felt in local communities, where the UK economic downturn has already had a devastating effect on families and individuals.

A large naval contingent at this year’s Defence Security Equipment International proved to be one of the most popular attractions for visitors.

03 Mar 2021
Registration is disabled.
We use cookies to ensure that we give you the best experience on our website. If you continue to use this site we will assume that you are happy with it.ContinueLearn more