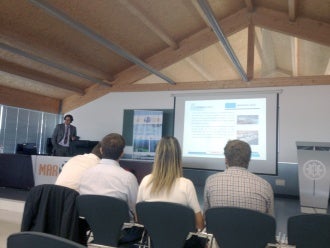 Those noises, produced by human activity as cruisers, offshore wind farms, ports, etc. can affect, sometimes in a severe way, to the wellbeing of the marine fauna.

To date, studies have centered on the acoustic radiation, leaving in a second place the rest of radiations, which also have a proven effect on marine life. In order to help to fill this gap, this study centers on analysing the levels and correlations patterns of several types of energy radiations in the marine environment: acoustic, electric, magnetic and seismic, specifically the radiations emitted by cruises. This kind of vessel have an increasing presence and importance worldwide, reason why its impact in the sea routes must be studied, in order to minimise the possible effects in the environment.

SAES has developed the measurements by a own-manufacturing system, capable of the simultaneously measurement of all the radiated influences; the multi-influence range system (MIRS).

This system, that can be configured as a fixed station for vessels, also have the advantage to be portable and easily deployable from a small boat, available to the implantation in any place and making easy the noise measurements, as well as other influences.

Results show not only a significant level of correlation between acoustic and seismic radiations by one side and electric and magnetic by other side, but additionally a correlation degree among the four analysed radiations.