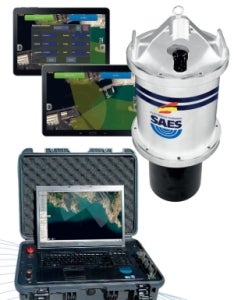 At sea, the threats coming at surface water can be easily detected by radar and visually, but usually there is a gap on underwater security. A diver or a small underwater vehicle can evade the traditional surveillance systems and endanger the superyacht and their guests.

The DDS-03 is an underwater security and safety system especially designed for the detection of divers and other threats as underwater vehicles that can be used for the surveillance and protection of anchored ships and ports.

When DDS-03 detects a threat, it automatically generates an alert indicating its position, distance, trajectory and type of contact, allowing cast a deterrent message to the diver or send a patrol to the area. The automatic detection, classification and tracking functions provides reliable alerts of multiple underwater targets with minimal false alarms.

The DDS system has different ways of deployment depending on the operational use and zones to be protected. It can be easy deployment ‘over the side’ of a superyacht, manually or using a davit crane, and also can be installed in a harbour pier or the sea bottom, in order to protect any port or infrastructure.

The system that accomplished with the most rigorous exigencies since their development initially emerged under military high requirements has also been designed to be simple and intuitive, with no specialist operator required.