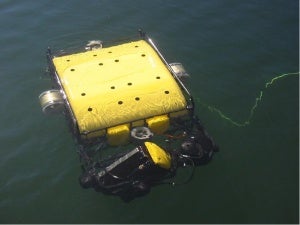 The week prior to the formal Government Acceptance Testing, Bluefin provided training to Fleet personnel. Trainees then operated the HAUV-3 in several in-water operational scenarios as part of the formal testing. The system demonstrated increased operational speeds and nearly twice as much endurance as its predecessor-the prototype HAUV-2. In addition to its standard DIDSON imaging sonar, it is equipped with a camera, which provides vital supplemental visual information to divers tasked with re-locating contacts.

The Navy also conducted a series of environmental tests consisting of freezing, shaking, and baking one of the vehicles and its support equipment. Testing highlighted specific areas for ruggedization in order to optimize the system for very harsh conditions. However, even after the tortuous testing, operators were able to power up all of the vehicle subsystems successfully.

In 2011, Bluefin Robotics was awarded a contract modification from Naval Surface Warfare Center, Indian Head to move the system design into production. Since then, Bluefin has delivered one system, which constitutes two vehicles and support equipment. An additional two systems are in production now.

The US Navy is sending a sonar equipped underwater robot as part of its search...