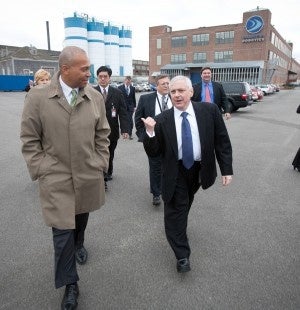 Governor Deval Patrick today joined Bluefin CEO David Kelly and employees at the company’s Quincy location for a tour of the facility, highlighting the Patrick-Murray Administration’s support of the Commonwealth’s thriving innovation economy.

"We are committed to growing our innovation sectors because that’s where the future lies and it creates great jobs," said Governor Patrick. "Companies like Bluefin Robotics are clear examples of our growing leadership in the world’s innovation economy."

Founded in 1997 by a core group of engineers from the Massachusetts Institute of Technology Autonomous Underwater Vehicle (AUV) Laboratory, Bluefin manufactures AUVs for scientific research, naval mine warfare and offshore oil field seafloor surveys, particularly for deep-water installations. In 2005, Bluefin became a wholly-owned subsidiary of the Battelle Memorial Institute, a global science and technology enterprise that develops and commercializes technology and manages laboratories for customers. Battelle oversees a staff of 22,000 scientists, engineers and support specialists and conducts $6.2bn in annual research and development.

In 2008, Bluefin started looking for a new facility to consolidate its engineering, manufacturing and marine operations teams and soon chose the Quincy Fore River Shipyard, which has access to a harbor, essential to the company’s product testing and development. The Patrick-Murray Administration’s Massachusetts Office of Business Development (MOBD) met with Bluefin Robotics in the spring of 2009 to discuss assistance for the expansion of the company’s facility. After working with MOBD, Bluefin, which at the time had 75 employees, was awarded a Tax Increment Financing (TIF) package from the city of Quincy and an Investment Tax Credit (ITC) from the Commonwealth’s Economic Development Incentive Program. The ITC is equal to 5% of the company’s $4.5 million investment, which is $225,000. Today, Bluefin is comfortably operating from their 55,000ft2 in Quincy and employs over 90 people. The company continues to hire skilled engineers and technicians in order to fulfill current contracts and position itself for future business.

"We are proud to be recognized by the Patrick-Murray Administration as having a positive economic impact on the area," said Bluefin Robotics CEO Kelly. "Moving to Quincy was a critical move that has allowed the company to take on more business and grow the company – the MOBD was a key component in making that possible."

Growing the innovation economy is one of the five main initiatives included in an economic development plan, "Choosing to Compete in the 21st Century," filed by the Administration in December 2011. Beyond previous achievements like creating a ten-year, $1bn life sciences initiative and creating the world’s largest global start-up competition and accelerator program in MassChallenge, "Choosing to Compete" sets goals of increasing state funding for early-stage entrepreneurs, identifying up to five emerging areas of global innovation excellence and supporting those areas through public-private collaborations, and improving talent retention for the innovation economy.

The US Navy is sending a sonar equipped underwater robot as part of its search...