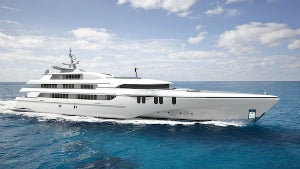 Kongsberg Maritime AS has granted STADT AS the contract to provide their awarded No-Loss AC drive system for a 84-metre Superyacht that will be built by ECHO YACHTs in Australia.

As the electric system integrator, Kongsberg Maritime will incorporate the STADT drive technology in to a fully integrated scope including their K-power switchboards and automation.

The yacht’s tri-hull configuration allows for a 20-metre beam, which will accommodate a vast deck expanse and palatial interior spaces. The Trimaran superyacht is stylised by Sam Sorgiovanni, while naval architecture is carried out One2Three, and the vessel is built by Echo Yachts.

Last year the patented No-Loss drives from STADT received the award as the most environmentally friendly electric drives on the market, by OSJ in London.

In 2015 STADT was again awarded best electric system at the Marine Propulsion conference. Later this year, STADT will celebrate its 30th anniversary as a company known for its innovative solutions in electric ship propulsion.

STADT Lean propulsion technology is available in many options that control the propeller power by...

The Navy requires efficient vessels that are safe and fully operational in all seasons and...

The Guidelines to Electric Propulsion in the Naval Industry

STADT LEAN DRIVE is specially developed for marine propulsion systems, where it is used together...

Many countries are searching for more sustainable power systems for their naval fleets. Electrification has...