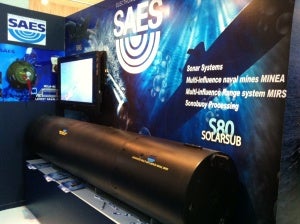 SAES, a specialist in underwater acoustics and electronics, has presented its developments in Latin America to representatives of the business environment, political and social, at EXPONAVAL 2012, a fair held in Chile on 4-7 December.

Since this international fair is one of the most important events in the defence maritime and naval sector in Latin America, SAES went with expectations of greater integration in the continent to provide effective solutions to suit the needs of the navy from each state.

SAES, which has already established successful collaborations with some South American countries, could become one of the reference companies in the continent in underwater acoustics. This follows from the interest generated by the latest developments of the company in the field of naval mines and multi-influence devices.

Numerous delegations, from countries including Colombia, Brazil and Chile, visited the stand of SAES and were advised by personnel, specialised in underwater security and defence, of products and services the company offers. Also worthy of note were the visits of delegations from Poland and Canada.

In the field of naval mines and multi-influence systems, SAES highlighted developments in MINEA, MILA and MIRS.

MINEA is one of the most advanced multi-influence naval mines, equipped with a wide range of sensors (magnetic, electrical, pressure, acoustic and seismic) and sophisticated algorithms processing. MINEA is also provided with counter-detection resources.

MILA is another outstanding product. It’s a smart computer controlled time-fuzzed underwater limpet naval mine. It can be set in the hull of a ship by divers or also can be used as underwater demolition charge.

MIRS, a multi-influence range system, provides actual measurements of the influences of a ship in a controlled and real scenario, obtaining the signature of surface ships and submarines. It can be installed in a fixed or portable system, and it is easy to deploy for two people from an inflatable boat.

These three products are part of a wide range of SAES developments widely recognised for their effectiveness in neutralising the submarine threat.