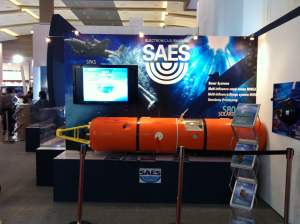 SAES, a company specialising in underwater acoustics and electronics, has had a notable presence at the Indo Defence 2012 exhibition held in Jakarta, Indonesia, from 7 – 10 November.

SAES has shown its key technological developments to the more than 20,000 delegates from 40 countries. The fair was attended by numerous authorities, highlighting the visit of the Minister of Defence of the Republic of Indonesia, which shows how important is the defence sector is in the host nation currently.

SAES also received visits from the commercial attache of the Embassy of Spain, Jaime Alcaide, and Commercial Counsellor, Antonio Estévez.

The systems developed by SAES in the field of Naval Mines and Devices Multi-influence aroused particular interest among the attendees:

MILA-6C is another outstanding product. It’s a smart limpet naval mine which detonation can be controlled by computer. It can be set in the hull of a ship by divers or also can be used as underwater demolition charge.

MIRS provide actual measurements of the influences of a ship in a controlled and real scenario, allowing obtaining the signature of surface ships and submarines. It can be installed in a fixed or portable system, and it is easy to deploy for two people from an inflatable boat.

These three products are part of a wide range of SAES developments widely recognized for its effectiveness in neutralizing the submarine threat.