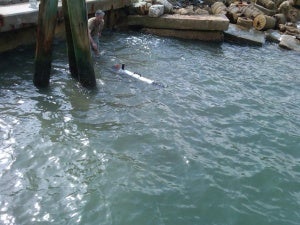 OceanServer Technology has received an order from Wentworth Environmental Services (WES) for a base 42 Iver2 AUV equipped with Klein 3500 Side Scan Sonar. The new system is expected to be a multi-purpose vehicle used for general imaging surveys and a test platform for new methods to characterise sites with underwater military munitions (UWMM).

The Iver2 AUV has the unique capability to dramatically cut down UWMM survey time with the 3500’s large swath coverage (125m plus) and no compromise on sonar image quality. This capability should be a major step forward in the challenge to safely identify and map decaying underwater chemical and conventional munitions which pose a risk to human health and the environment including an explosive hazard.

Automated AUV sweeps utilising high resolution sonar for ongoing security purposes is another tool to secure harbours against possible explosive devices which can be a serious threat to port commerce. The AUV can also be employed to locate and map structures on the seabed such as well heads, cables and oil and gas pipelines.

Going forward, Wentworth will receive additional Iver2 AUV’s including a magnetometer option for sub-bottom profiling of objects that have been covered in silt and mud on the seabed and one fitted with a HD video / still camera for videoing underwater, including fauna.

Wentworth, a Nova Scotia-based company, engages in strategic partnerships with niche technology and specialises in adapting science, technology and proven processes to complete their missions.

Company president, and a well-known world expert on sea-dumped chemical weapons, Terrance P. Long, stated: "I am excited with the delivery of our first Iver2 AUV that will allow Wentworth the capability to respond to the ever increasing needs of our clients. With thousands of underwater munitions sites and other hazards on the sea floor we can now autonomously map them for identification, investigations and or remediation. This also allows us an opportunity to provide marine support services to oil and gas sector."

L3Harris Technologies to Deliver Undersea Vehicle for US Military

The US Navy and the Defense Innovation Unit (DIU) has selected L3Harris Technologies to provide...