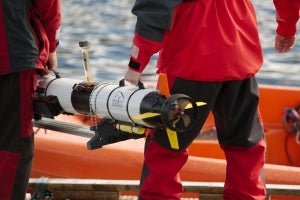 The Iver3-580 AUV is the third generation AUV produced by OceanServer and builds on the success of the Iver2-580 that has recently been discontinued after ten years of service and more than 200 systems shipped.

Three different commands within the US Navy have purchased 4 Iver3 systems for a variety of applications to support the data requirements of the warfighter. OceanServer has started customer shipments and expects to deliver the majority of these vehicles by early in the second quarter of 2016.

All Iver3 AUV models come standard with OceanServer’s VectorMap mission planning and data presentation tool, which provides geo-registered data files that can be easily exported to other software analysis tools.

This unique AUV design has enabled OceanServer to carve out a very strong position in the research space for Autonomous Underwater Vehicles, sensors and behavioural studies. The VectorMap programme can input NOAA ENCs or any geo-referenced charts, maps or photo images, allowing the operator to intuitively develop AUV missions using simple point-and-click navigation.

The base vehicle gives university, government and commercial users an affordable base-platform for sensor development or survey applications in water quality, sub-surface security and general research.

L3Harris Technologies to Deliver Undersea Vehicle for US Military

The US Navy and the Defense Innovation Unit (DIU) has selected L3Harris Technologies to provide...