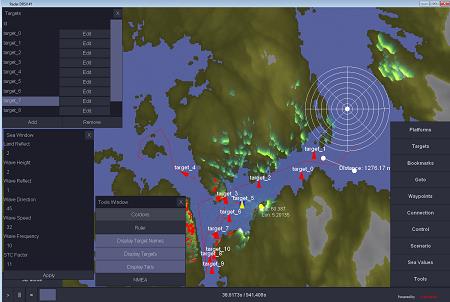 Dspnor’s highly versatile LAN-to-analogue converter, DeStreamer, has been selected as a tool by European navies to ensure compatibility between modern LAN-based radars and existing legacy systems.

The DeStreamer is a reasonable and high-performance workaround solution, while its investment cost prohibits changing existing system layouts.

Dspnor has already sold more than 160 of the DeStreamer units, which support multiple LAN protocols such as Asterix, Raytheon and SAAB, and output analogue signals using proprietary and generic protocols.

The output formats include:

New extensions to the ScanView framework

The ScanView framework, which is the most versatile radar processing suite on the market, has received the following new modules:

The venerable ScanFaker Radar Display Stimulation Board has served customers worldwide since 2000. Developed in the desert of New Mexico, US, its life may soon come to an end due to the fact that most modern simulators are using LAN as their primary way of transferring radar data from the antenna and to the display.

The SoftFaker will perform the exact same function as the ScanFaker Board, namely to mimic a transceiver. It is using the same programming interface as the ScanFaker and in most cases will not require a recompile.

The first server has already been completed, with more to follow soon. Our existing customers will be informed over the next couple of months.

Dspnor will be showcasing its hardware and new software at the Defence and Security Equipment International (DSEI) exhibition in London, UK, being held between 12-15 September.

The company will be at stand S9-296 and will introduce the following:

Dspnor is bringing an extensive team over, including FPGA developers, physicists, GPU / Math developers, and HW developers, to answer any questions attendees may have.

To find out more, please contact the company via the enquiry form.

Dspnor will attend the Defence and Security Equipment International (DSEI) trade show with its ScanServer...

Dspnor to Showcase Naval Products at NAVDEX 2019 in Abu Dhabi

Dspnor will be showcasing its naval products and skills at the NAVDEX 2019 exhibition in...

ScanStreamer II Due for Shipping in November

The ScanStreamer family has been restructured due to obsolescence management. The first member, ScanStreamer II...

Dspnor to Exhibit at Euronaval in Paris

Dspnor will be exhibiting at the Euronaval in Paris, France, from 23-26 October. The company...