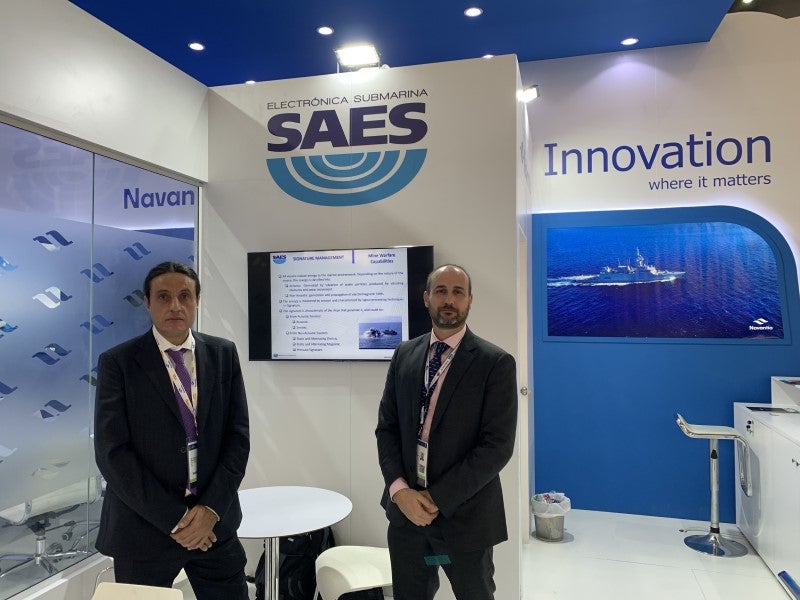 SAES has exhibited along with Navantia in the first edition of the World Defense Show (WDS 2022), held in Riyadh, Saudi Arabia, from 6 to 9 March, presenting its products on underwater security and defence for both civilian and military markets.

WDS2022 is an international event to showcase the latest technological developments from around the globe. SAES is the only Spanish company specialised on underwater acoustics and electronics. It provides high-tech systems for all types of naval defence platforms, such as minesweepers, frigates, submarines, maritime patrol aircrafts (MPAs), ASW helicopters and unmanned vehicles (UXV).

SAES has presented in the World Defense Show its products for the naval platform detection, such as MIRS (the multi-influence signature measure system), which provides high-precision measurements in real-time; and MINEA, the most advanced naval mines manufactured today, which measures the real observability of naval platforms at sea.

MIRS is a multi-influence signature measurement system for surface and submarine vessels, which simultaneously measures the acoustic, electrical, magnetic, pressure and seismic influences. Since this is a portable station, it can be used in any scenario and with multiple objectives: for obtaining the vessel’s signature in a real scenario, used on a fixed station, as a discreet way of obtaining intelligence in strategic areas, routine signature checks or prior to a mission.

MINEA, the exercise naval mines manufactured by SAES, are used to measure the real detectability of naval platforms at sea. It is a modern system with high capacity for detection and multi-influence signature signal processing.

SAES collaboration with the Saudi industry

SAES has contributed in the Navantia (Spain) and Saudi Arabia corvette programme by developing the NAVANTIS CIC combat system and the simulation software for the towed array sonar. SAES is currently giving training to the Saudi crew in sonars, general acoustics and sound propagation.

During WDS 2022, SAES has also met representatives of the Saudi industry to start a collaboration on the development of antisubmarine solutions in Saudi Arabia.

SAES also was invited to the reception event hosted by the Spanish Embassador to Saudi Arabia, Jorge Hevia Sierra, to the Spanish companies participating in the World Defense Show.

Special mention among the authorities who attended the event should be made of the Minister of Industry, Trade and Tourism, Ms Reyes Maroto; the Secretary of State for Defence, Ms Esperanza Casteleiro; and Admiral Mr Aniceto Rosique (Directorate-General of Arms and Materiel). They all enjoyed a pleasant meeting with all representatives of the Spanish Defence industry.